The CN staff has, after heated debate, decided that this information should be released to the public, despite the irreparable harm that it might cause over the next few days.

A creation of Corn Nation, CHAOS (Corn Nation's Hacking Attacking And Omniscient System - really, we need a better name) recently intercepted the following memo. CHAOS is a vast spy network that not only includes feet on the ground, but the most sophisticated hacking technology known to mankind, the kind that hacks not only your computers, but your brain.

Bobby Petrino's affair? Knew about that before he did. Bret Bielema to Wisconsin? We planted that thought in his head three years ago. That "Hello Kitty" nightie you're thinking of buying your wife for Christmas because you think it'd be cute? What are you, 10?

The following is not meant to alarm you, but only notify that you of coming cataclysmic events so that you may be properly prepared. 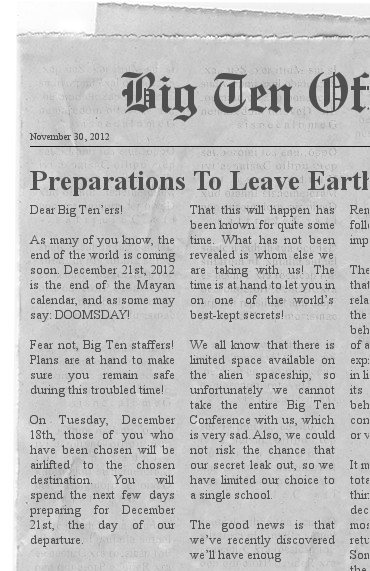 The memo in its entirety states:

Fear not, Big Ten staffers! Plans are at hand to make sure you remain safe during this troubled time!

On Tuesday, December 18th, those of you who have been chosen will be airlifted to the chosen destination. You will spend the next few days preparing for December 21st, the day of our departure.

That this will happen has been known for quite some time. What has not been revealed is whom else we are taking with us! The time is at hand to let you in on one of the world's best-kept secrets!

We all know that there is limited space available on the alien spaceship, so unfortunately we cannot take the entire Big Ten Conference with us, which is very sad. Also, we could not risk the chance that our secret leak out, so we have limited our choice to a single school.

The good news is that we've recently discovered we'll have enough space to take selected staff of the Ohio State Buckeye athletic department and a number of their athletes, including the entire football and basketball teams! We'll of course have to bring many of their young women athletes for obvious reasons!

We of course will be bringing the entire library of the Big Ten Network so that you won't miss any episodes of "The Journey"!

Looking forward to leaving with you!

CN has intercepted other memos that indicate the chosen destination as Bucharach, France, home to a mystical mountain of yore that is believe to house one of many giant alien spaceships that are stationed around the world. On December 21st, the mountain is to open up, revealing the aliens and allowing select members of the human race on board.

We will continue to monitor this situation as events unfold.