Nebraska faces Penn State in a key Big Ten battle this weekend in Lincoln. Ticket prices remain above the current average price for Husker tickets this season, but are steadily dropping.

[This is an article sponsored by our ticket vendor, TiqiQ. I hope you consider supporting CN whenever you're looking for Nebraska game event tickets. Thank you. - Jon]

Nebraska once again proved it can almost never be counted out of a game last weekend on the road in East Lansing, rallying from 10 points down - the third time this season Bo Pellini's team has won a game after trailing by a double-digit margin - to pull out a late-game victory over Michigan State, 28-24.

Though not as highly-touted a contest given Penn State's inability to play for a conference championship or in a post-season bowl game, ticket prices for Saturday's contest, currently averaging $136 per seat, just $4 above the current average price for Cornhuskers tickets this season. It's also the third highest behind earlier season tilts between Nebraska vs. Michigan and Nebraska vs. Wisconsin. Ticket prices have also seen a decline in value of 22% percent over the last month, which has brought the get-in price down to a more reasonable $66 per ticket. 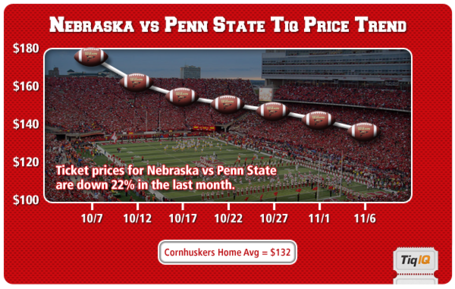 Cornhuskers quarterback Taylor Martinez played a brilliant fourth quarter Saturday against the Spartans, throwing two touchdown passes within the game's final 7:02 to give Nebraska it's seventh win of the year and a continued share of lead in the Big Ten's Legends Division with the University of Michigan.

The junior passer may have finished the day with three interceptions, but with 160 yards passing and an additional 205 yards rushing, became the program's career leader in total offense, surpassing 2001 Heisman Trophy winner Eric Crouch.

Tailback Ameer Abdullah, playing in place of an injured starter Rex Burkhead for the fourth time this season, also posted his third 100-yard rushing performance in as many weeks in Saturday's victory.

Martinez, Abdullah and the rest of the Nebraska Cornhuskers will look to continue to build upon the momentum of what is now a three-game winning streak heading into this weekend's match up with Penn State, who plays in Lincoln for the first time since Nebraska officially joined the Big Ten in 2011.

The Nittany Lions, who last year hosted the Cornhuskers the same week accusations of sexual abuse against children by assistant coach Jerry Sandusky broke in the media, seek a different outcome than last season's meeting, when PSU fell by just three points despite trailing by 17 points in the third quarter.

Penn State currently carries with it plenty of positive momentum, having last week manhandled Purdue 34-9 thanks to the passing of senior Matt McGloin (22-of-36 passing for 321 yards and two touchdowns), running of sophomore tailback Zach Zwinak (21 carries for a season-best 134 rushing yards) and receiving of junior wideout Brandon Moseby-Felder (a career-high 129 yards and a touchdown on six catches).

The Nittany Lions now sit 6-3 on the year after two early loses to Ohio and Virginia, but boast of an impressive 4-1 record in conference play, with impressive wins over Illinois, Northwestern, Iowa and, of course, the Boilermakers.

Of concern for first-year head coach Bill O'Brien this weekend will be Nebraska's ability to score, with the Cornhuskers ranked second in the Big Ten behind Ohio State after averaging 38 points per contest.

Penn State has been playing outstanding defense throughout the year, however, surrendering just 17.1 points a game, good enough for third-best in the conference, and 121.9 yards a contest to opposing rushers, also third-best in the Big Ten.

Nebraska, meanwhile, could prove susceptible to the Nittany Lions ground attack, given it is currently giving up 183.1 yards a game on the ground, but should hold McGloin in check, with its defense allowing quarterbacks to complete just 46 percent of their passes for an average of 156 passing yards per outing.