The ranking of teams didn't change much, but the race for Indy is heating up. So are a couple of hot seats.

Wolverines: (6-3, 4-1) Michigan fans can sleep a little easier now. There were a lot of frazzled UM fans as the news of Denard Robinson’s unavailability for this game and that carried over into the second quarter as Minnesota struck first on the scoreboard. Midway through that quarter, the Wolverines finally found the end zone and everyone sighed in relief and Michigan controlled the game the rest of the way. Quarter back Devin Gardner moved back under center after spending much of this season and last at the wide receiver spot. Given his relatively short preparation time he performed admirably going 12/18 for 234 yards and two TD’s. The Wolverines also found a running game to keep the pressure off of Gardner a bit, rushing for 155 yard as a team, led by Fitz Toussaint’s 70. While the win was nice, all eyes will return to the health of Robinson. The Wolverines are by no measure out of the division race, but will need Robinson to be available and healthy if they want to challenge Nebraska for the division crown and a berth in the Big Ten title game.

Gophers: (5-4, 1-4) Minnesota is better by nearly every measure this season, but there’s still a very long way to go before they are able to contend for anything resembling even a division title in the Big Ten. The Gophers think they’ve found their man at quarterback in Philip Nelson but the Wolverines were able to get to him, unsettling the freshman, causing him to only go 13/29 for 142. That’s not gonna get it done. He’ll improve, but there’s still a long way to go. The Gopher defense had trouble putting the clamps on a Michigan offense without it’s best player in Denard Robinson. The Gophers need one more win to go bowling for the first time since 2009. Next week will be their best shot as they face winless in conference play, Illinios in Champaine.

Illini: (2-7, 0-5) This is just a program wandering right now. It doesn’t help when they’re going to Columbus to play a focused and undefeated Ohio St. team. This one was over fairly quickly with Ohio St. up 31-6 at the break. There’s just no way to spin it anymore. This team is bad. Their season is over. It’s just a matter of playing out the string right now and hoping you can get some of your young guys ready for next year.

Buckeyes: (10-0, 6-0) The Buckeyes took care of business on Saturday rolling up nearly 600 yards of offense and limiting Illinois to merely 170. It was a white washing. Carlos Hyde carried the load for the Buckeyes rushing for 137 yards and three TDs. Miller was his usual tour de force, but this time did much of his damage through the air rather than the ground. He threw for 226 yards and two TDs . He’s been a darkhorse Heisman candidate all season long and he did nothing to diminsh his case. He probably won’t end up in New York this year, but he’ll be right near the top of the list next year.

Hawkeyes: (4-5, 2-3) If it wasn’t gut check time for the Hawkeyes before, it certainly is now. Their season shattered long ago, the battle for mere bowl eligibility becomes a bitter fight. This game was nearly a must win and next week vs. a winless in conference play Purdue team certainly is as Michigan and Nebraska wait on the horizon after that. Things looked good for the Hawkeyes early as they rushed out to a 14-0 lead after waiting out a thunderstorm. Unfortunately for Iowa, they had no answer for IU wide reciever Cody Latimer who lit them up for three TD catches. Iowa was able to fight back and take the lead early in the fourth quarter but couldn’t hold on and now their season hangs in the balance.

Hoosiers: (4-5, 2-3) After going nearly two years between winning conference games, the Hoosiers have now won two in a row and face one of the biggest games in program history on Saturday as Wisconsin comes to town and the division title could be in the balance. As crazy as it seems, Indiana is very much in this race and a win on Saturday would give them the inside lane to pulling off the most shocking of scenarios. That said, Wisconsin is a much different beast than either Illinois or Iowa. But the game is in Bloomington and Wisconsin will still be without their top quarterback, so anything can happen if they find a way to shut down Montee Ball. Regardless of what happens, the progress Kevin Wilson has made with this squad is undeniable.

Nittany Lions: (6-3, 4-1) This will be a season that Penn St. fans will cherish for a long time, especially since the reality of what this team has in front of them the next several years still awaits. Saturday was just another chapter in this page-turner. Penn St. steamrolled a hapless Purdue team piling up 506 yards of offense. Quarterback Matt McGloin had another big game throwing for 321 yards and two scores while running back Zack Zwinak chipped in for 134 on the ground. This is a very stout and tough minded team and should provide hope for the future once the Lions emerge from their shroud of sanctions. Credit the players and coaches for playing through everything that was thrown at them this year. Many teams would not have handled it with the maturity and fortitude these guys did.

Boliermakers: (3-6, 0-5) Who saw this coming from this team? It has been a complete collapse from a team that looked like they would give Wisconsin a run for it’s money in that East division race. Instead, the wheels have fallen off and the season is now in shambles and the hot seat under coach Danny Hope is no longer hot, its in flames. They’re not just losing games anymore, they’re losing highly touted recruits. Frankly, it’s a little surprising the they haven’t made a move yet to try and stem the tide of negative momentum a bit. With games vs. Iowa and Illinois looming, any hope of salvaging this season and facing Indiana for the opportunity to go bowling are fading fast. It’s now or never for the Boilers.

Huskers: (7-2, 4-1) The Heart attack Huskers do it again pulling off their third double digit comeback in four games. It’s not a recipe most coaches, players or fans like to cook up too often, but somehow the Huskers have made it work for them. Quarterback Taylor Martinez continually asks danger out for dinner, but she keeps standing him up, which is forturnate for his Husker teammates as they their poise under fire has been rather impresive. This team doesn’t die. When you get an opportunity to knock them out, you better do it or you will likely regret it. The defense made enough plays when it had to to give their offense a chance pull off another dramatic touchdown. Running back Ameer Abdullah gets a little better every week as he had another solid game in place of the injured Rex Burkhead, though the absense of any other backs to help shoulder the load is a little puzzling. With the Huskes now firmly in control of the West division race, now would be a very bad time for their annual brain freeze game and Penn St. is just the team to pull that trick this year. Huskers need to take care of business on Saturday.

Spartans: (5-5, 2-4) In a season full of close calls and brutal losses, this may have been the cruelest of all. MSU is lamenting missed opportunities and questionable play calls (and penalties) as they head into their bye week trying to make sense of a season gone wrong. The Spartans did everything they could to put themselves in position to win the game on Saturday but in the end couldn’t come up with a Taylor Martinez fumble and let receivers run wide open on the eventual game winning drive for the Huskers. Do either of those things and the controversial pass interference penalty a play before climactic catch by Jamal Turner likely never comes into play. It’s unfortunate for Sparty because Saturday saw the offense have a pretty solid day in what had become a rather disappointing season. Running Back LeVeon Bell rushed for 188 yards and two touchdowns. Stunningly, Michigan State now finds itself on the brink of bowl eligibility. They’ll likely find a way to get there, but it’s not a gimmie as Northwestern and a trip to dangerous Minnesota await. 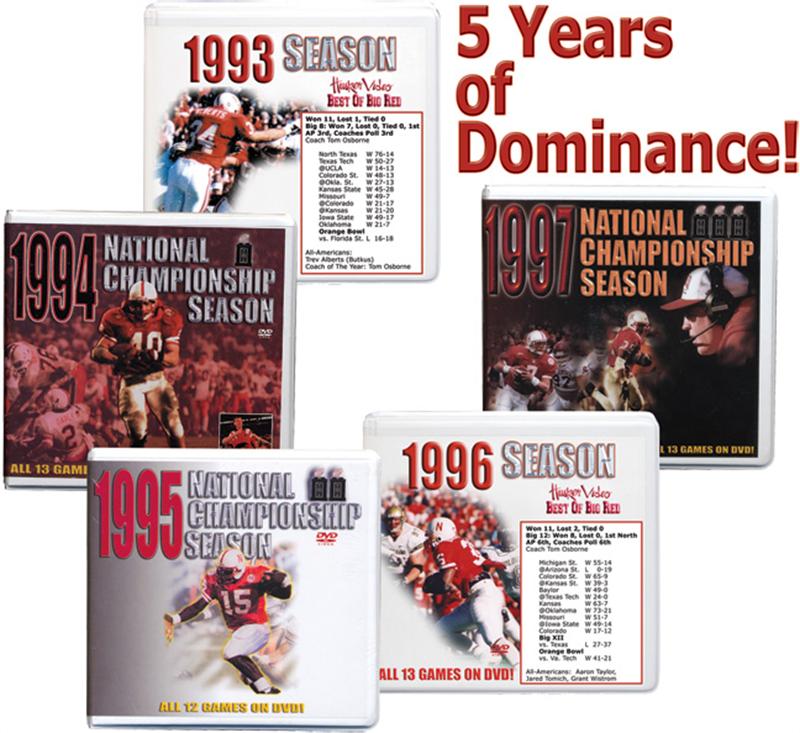 Get Your Husker DVDs!


Player of the Week: Cody Latimer. He didn’t put up the most eye popping stat line we’ve featured this year, but the Hawkeyes had no answer for Latimer as he hauled in three touchdowns to keep the dream alive for the Hoosiers.

Final Thoughts:
- Here’s a sample of teams that are now bowl eligible: Duke, Rutgers, Tulsa, Louisiana-Monroe, San Jose St. Some teams you won’t be seeing in bowl games: Ohio St, Penn St. Colorado (how did they win a game, again?), Auburn. Gonna be a lot of non-sexy bowl matchups this year. There are every year, of course, but more than usual.
- I hate to think that any Big Ten school would say they’d rather not see a team in the Rose Bowl like Oregon, you’ll generally play all comers at that point, but you have to think the higher ups are rooting for the Ducks to find their way into the BCS title game. That’s a brutal matuchup for Nebraska, Wisconsin and certainly Indiana should they pull off the miracle. If you’re Jim Delaney, you’re hoping beyond hope that Nebraska finds way to Pasadena. They’re the B1G’s best chance to be competitive out there this year and I think, privately, they’d welcome any opponent...other than Oregon.
- How severe was the blow to Colin Klein’s head on Saturday? That’s the question they’re asking in the little apple this morning. The answer to that question has significant implications to the Heisman trophy race as well as the National Title. The story was that he didn’t know where he was after he came off he field. That’s not good. Anyone know who the back up is at Kansas State? We could be about to find out. They’ve got a pretty big game on Saturday once again as they head to Fort Worth, Texas to take on TCU in prime time. Gut check time in Manhattan.