Big Ten To Spot Minnesota 14 Points This Weekend Against Nebraska

Chicago, Illinois - The Big Ten Conference has announced that the Minnesota Gophers will start the game against the Nebraska Cornhuskers this weekend with a 14-0 lead. The decision was made by Commissioner Jim Delany because of a request by Huskers head coach Bo Pelini.

Share All sharing options for: Big Ten To Spot Minnesota 14 Points This Weekend Against Nebraska

That was the quote Bo Pelini made after the Huskers rallied from a 20-6 deficit against Penn State last weekend. Pelini's Huskers have rallied from four double digit second half deficits this year.

When reached for comment about the 14 point spot, Bo Pelini replied,

"Bring it. I need something to get my team going in the first half. We have to go out there and execute. We need to play fundamentally sound football and not hurt ourselves. We just have to play better football." 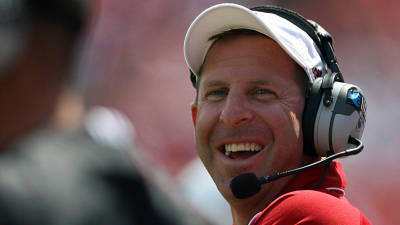 Offensive Coordinator Tim Beck was also asked about the slow starts. He implied that he had to see how Penn State was going to defend Nebraska. Sometimes it takes a few series to see what the opponent is doing defensively.

"(Penn State) had some neat things," Beck said. "It took us awhile to figure it out. And you gotta pound it to see how they're playing it. It's tough in three plays. You got to see them a little bit. And that takes time."

"We respect and review all requests from conference athletic directors and coaches. We believe that this is fair and balanced, just like the permanent cross over rivalries are. If the Mankilling Mastodons truly want to live up their name, they should have no trouble covering the spot.

When asked about the free 14 points, Gophers head coach Jerry Kill had this to say,

This will mark the first time in Nebraska football history that the team has actually spotted their opponent any such points. Some might say that the Huskers gave Penn State seven points in the game last weekend after the Blackshirts allowed a touchdown to the slowest guy on the Penn State roster who outran them all Lions on their fourth play from scrimmage. However, the official Corn Nation stats guy, Cobby, disagreed,

"No. An opening kick-off returned for a touchdown is spotting someone free points. Allowing a guy that my grandma could outrun to score doesn't count. Even if it came on the fourth play of the game."

So there you have it Huskers fans. Enjoy the history on Saturday and "Beat Minnesota!"

*Some of the quotes in this story may not have actually been said by the person attributed to saying them. Please laugh. This is a humor piece.