Husker Fans - You're Invited To A Tailgate in Columbus!

A group of Ohio State fans is inviting Nebraska fans to attend their tailgate. There's not even a hidden agenda, unless you think being friendly and sportsmanlike is evil.

Share All sharing options for: Husker Fans - You're Invited To A Tailgate in Columbus!

Hey Husker Fans! You're all invited to a tailgate this Saturday in Columbus!

No, really you are. All of you.

Ohio State fan Pat Hartline contacted me on twitter last week as Nebraska had just finished beating the Wisconsin Badgers and invited me to a tailgate at Ohio State this weekend, except that he didn't just invite me. He invited everybody:

My first thought was that this was being put on by some corporate guys trying to sell stuff. It's not. It's just a bunch of Ohio State guys who like college football, tailgating, and apparently being nice to strangers.

I wanted further information, so I spoke with Hartline yesterday about his tailgate and his invitation, all the while wondering what he was selling.

Only thing is, he wasn't selling anything at all. In fact, he doesn't even charge. 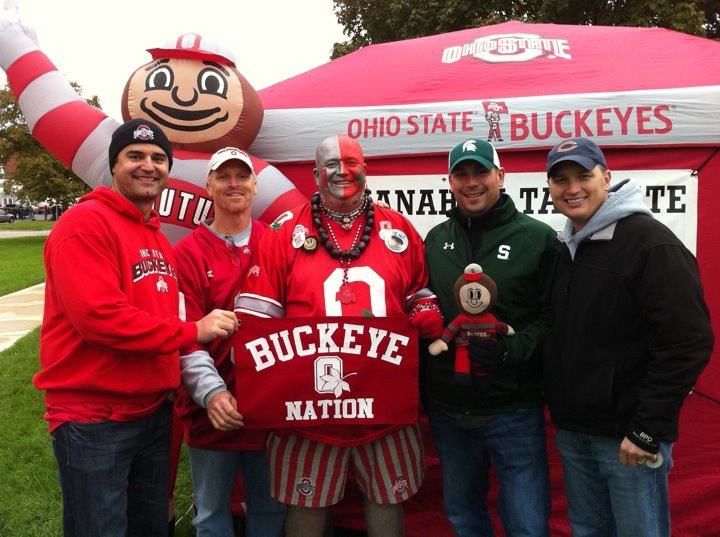 Hartline, second from left, sounds way too laid back to be a normal Buckeyes fan.

Hartline said he started tailgating about six years ago, calling his tailgate the "Buckeye Battalion". Things around the stadium changed, he had to move because the Athletic Department wanted to charge $2,500 a year (amongst other new restrictions) for the location they were using.

Hartline had to move, so he joined up with Jerry Manahan and along with two other guys, Jeremy Harris and Andy Leitch, and together they've all become known as the Buckeye Battalion/Manahan Tailgate.

They have a lot to share. They have around 12 canopies, although Hartline said they don't normally put them all up at once. They have beer pong, cornhole, and six televisions for all day game watching. They'll serve breakfast, lunch, and dinner. This week they're having a Lake Erie fish fry, provided by Buckeye Santa. Others will provide beer,

While there's not a cost, there is a tip jar, and Hartline would appreciate any contributions. He said he buys his equipment off craigslist, but he is not sponsored by some big corporate interest and from time to time has stuff destroyed such as the canopies they lost last year in a storm.

I pressed Hartline about his hidden agenda. Everybody has one, right? His is to get in good with Husker fans, and then, I don't know, take over the world? 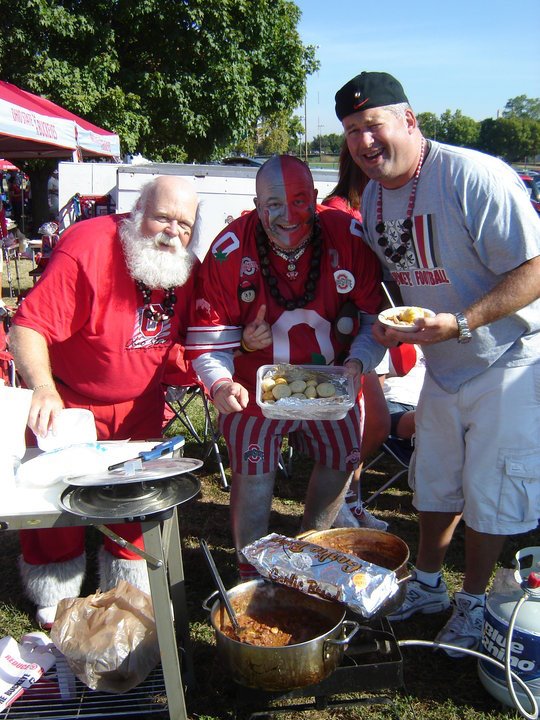 Buckeye Santa will provide the fish for this year's fish fry, while Big Nut and Jerry Manahan provide some of the appetite.

Hartline said he just likes to hang out and watch the games. He doesn't talk smack, although admits there's typically someone around who wants to start something. He typically doesn't attend the games, but stays around the tailgate all day.

The good news for Husker fans is that this may be the most convenient, easily located and accessible tailgate possible in Columbus.

The parking lot they're in is a shuttle lot called the Sisson Lot near Sisson Hall.

The easiest way to find the tailgate is by downloading this handy-dandy campus map, then zoom into the stadium area.

The tailgate is west of the stadium just across the river. It is South of the Coffey Road intramural fields. They are set up just below the blue "P" under Motorcyle Sign on the campus map.

After talking to Hartline for a while, I regret not heading to Columbus. I've always wanted to see a game there, and even without a ticket, I'd have had a place to hang out.

I figured out Hartline's hidden agenda without him realizing it.

I have had a strong hatred for Buckeye fans for years. Now some Ohio State fans come along, being all friendly and such and suddenly I don't hate them as much.

If this keeps up, next thing you know, everybody will start being nice to each other, keeping sports in perspective and not freaking out over the small things in life.

I can't think of anything more evil than that.