TiqiQ has some interesting information for those looking to still get into the Nebraska vs Michigan game. 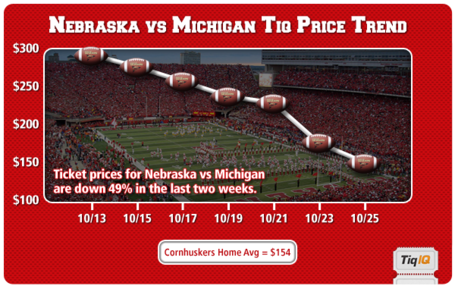 With Nebraska celebrating the 50th anniversary of its NCAA record sellout streak of 353 games this weekend, those planning picking up tickets to take in this weekend's Big Ten battle with the Wolverines have been rewarded for their patience as ticket prices have fallen 49% in the last two week. Currently, Cornhuskers fans can expect to pay an average of $150 per ticket, which is actually 4% below the average cost of Nebraska Cornhuskers tickets this season. Fans can now get into Memorial Stadium for as low as $60, with an additional 150+ tickets available for below the game average.

Michigan comes into Lincoln seeking to gain the inside track on the Legends Division championship Saturday as it hits the road to take on the Nebraska Cornhuskers in Lincoln, likely leaning on a defense that over the Wolverines' last five games has surrendered just 9.8 points a contest and a total of three touchdowns to do so.

Standing in direct juxtaposition is Nebraska's offense, which powered by dual threat quarterback Taylor Martinez and the running back tandem of Rex Burkhead and Ameer Abdullah has averaged 279 yards of rushing in each of its first seven games this year and risen to the top of the Big Ten in scoring with 41.6 points a contest.

Burkhead, who re-aggravated a knee injury last week at Northwestern, may not play in Saturday's game, but Abdullah, who leads the team with 105 carries, 615 yards and seven touchdowns, should prove a more than fitting replacement, especially after rushing for 286 yards and four scores in place of the senior earlier in the year in contests against UCLA and Arkansas State.

Martinez, meanwhile, will have to play better than he did in a 45-17 rout of Nebraska in Ann Arbor last year, where he finished 9-of-23 passing for 122 yards and a touchdown and totaled just 49 yards on 16 carries.

Defensively, the Cornhuskers will have their hands full in containing dual-threat quarterback for Michigan, Denard Robinson, who to this point in the season, has accounted for two-thirds of his team's total offensive output.

As the Washington Post points out, however, Wolverines tailback Fitzgerald Toussaint could prove the biggest challenge for Nebraska, as in facing two other teams with dual-threat quarterbacks so far this year, Nebraska's defense failed to find success shutting down opposing backfields. That said, once the whistle blows all the analysis goes out the window and fans in Lincoln should expect a good show as their Cornhuskers look for a win that would move them into a tie at the top spot of the Big TEN Legends division.

Jon: This is a post from our ticket provider - TiqiQ. If you're looking for tickets to Nebraska events, I hope you support us by supporting them. Thank you.