Nebraska received two commitments at the Semper Fidelis All-American Bowl high school all-star game Tuesday night. Tempe, AZ defensive end Avery Moss and South Jordan, UT linebacker Jared Afalava became the 9th and 10th members of the Huskers 2012 recruiting class. Both are rated as 3-star prospects by Rivals.com and give the Huskers four linebacker commitments and seven total on the defensive side of the ball.

Afalava is rated as the #4 player in the state of Utah and 46th at his position nationally. He is 6'3" 215 and has been told by Husker coaches that he will be groomed as a middle linebacker. Nebraska beat out BYU, Oregon, UCLA, Utah and Washington for his commitment. 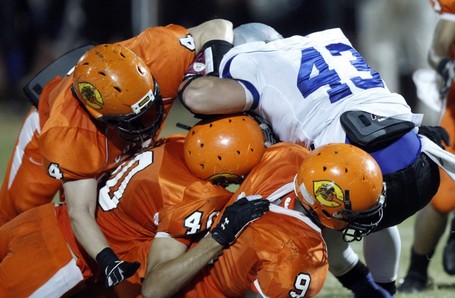 Moss is rated as the #12 player in Arizona and 31st nationally at his position. He is 6'4" 245 and was also offered scholarships by Arizona, ASU, Purdue, Stanford, Washington and Wazzu. He is the current teammate and cousin of 5-star offensive line prospect Andrus Peat who is also considering a commitment to the Huskers. Of course, it is hoped that this commitment, plus the presence on the roster of Andrus' brother, redshirt freshman Todd Peat, will help to convince the younger Peat that a commitment to the Big Red is not just the wisest life decision he could make to this point - it's simply kismet.

Ross Els was the lead recruiter for Afalava and John Papuchis closed the deal with Moss.

(Note: I've removed Westerkamp as committed. He may yet end up in Lincoln, but anyone who is saying that they are still trying to make up their mind while awaiting visits from two sets of coaches can hardly be considered committed at this point. Not trying to bag on the kid - guys who can catch and hold a football are at an obvious premium to the Huskers - just stating a fact that some recruiting sites are being a little head in the sand about.)