I think that's the word that best describes the faction of Husker Nation that closely follows it's university's legal pursuit of high school boys. It's not too hard to figure out why either - combine a small class (somewhere in the neighborhood of 16-19) with the fact that we have only one early JC signee and 10 verbal commitments with signing day just under two weeks away. At least one of our remaining targets is planning to wait until Feb. 1 to announce. There appears to be some positions with holes and no verbals yet. Frightening stuff, right?

Maybe not. Yes, we'd all like to have verbals lined up from a collection of four and five star specimens with maybe a couple of threes thrown in as projects. But, unfortunately, our population base more resembles Idaho or Utah instead of those which produce Cal, Texas, Florida and Georgia pipelines. We don't line up the blue-chippers because they all live within an hour of campus. In a state known for its conservatism and honesty, we have to sell a little and take few chances. And that's what Bo and company are doing.

So let's take a look at the race to the finish line:

Right off the bat, let it be known as always that I'm no self-proclaimed insider. I read some Husker boards, Rivals, see what some of the other schools are saying and try to make some sense out of it. That's all and I figure in the end, I get it right about 50-50 (or 33% if the kid has only narrowed to three schools). Trying to guess the inner workings of the mind of a 17-year-old is as exact a science as trying to predict what Ricky Williams' life's goals are on any given day.

Remember, some schools lose recruits because their junior all-conference corner is wearing the number the kid wanted. LaMichael James left the Lone Star state for Oregon because the unis were cool. Even though they were ordered - rather sternly - to cease and desist the practice several years ago, there was a reason that Oregon and Colorado, among others, basically unleashed hordes of student-prostitutes on their prospective recruits during their visits. 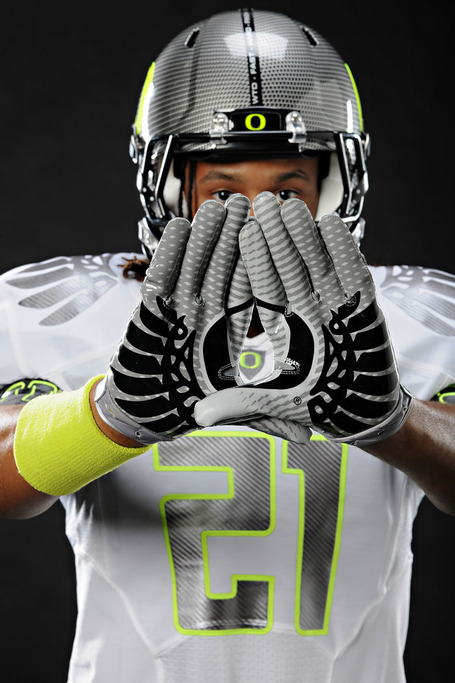 Honestly, what prancing star of A Chorus Line future All-American wouldn't want to ball in this get-up?

They may not completely understand the 17-year-old mind, but they sure as shit took a solid guess.

So the point being that all this is an intuitive crapshoot, here's a few thoughts:

- The coaches have to find this hilarious at times. They're the ones actually in the living rooms, hosting the visits and talking on the phones with these kids, and THEY don't know what's going on in their minds until they hop on board. Yet every friend of a friend of the family or assistant to the travelling secretary has the inside dope.

- The best of the recruiting website/service guys will be pretty honest in telling you that, after all their conversations with recruits, coaches and families, they're just going with a gut instict based on their experience when asked to predict who's going where. The yahoos who make 100% guarantees? They're hitting at much less than 100%.

- We're going to get a couple of these kids on signing day - and it's a good bet the coaches have asked, been told and promised to keep mum. They're human, they want to know if they need a backup plan. They also understand and respect that some of these kids want their day in the sun. And since they also know that most of them are going to disappear from the public eye for a few years, if not permanantly, they're happy to let them enjoy it.

- Judging from the number of folks with claims to "inside info", Bo and his assistants must each have an entourage of peeps who hang around the offices and accompany them on their trips and personally know the families of the recruits. I mean they know EVERYTHING. It makes following this process so much easier, no lie.

The brutal life of a recruiting expert....

So culling together what I can, let's take a peek at who we've got, who we might be after and how that fits in with our needs.

Verbal - Tommy Armstrong *** - solid - Armstrong has never wavered & if the pursuit of Devin Fuller bothers him, he hasn't indicated so. Of course, given previous experience, the days of promising a QB recruit they'll pursue no other if he commits are likely over.

Pursuing - Devin Fuller **** - With Alford giving So. Miss a verbal, getting Fuller as a 2nd QB would be huge as the Huskers try to re-establish depth at a position with only 2 on scholarship. It appears to be coming down to NU & Rutgers, although some other schools who wanted him as an athlete are now changing their tune and saying they'll give him a shot at QB. He probably not buying it. In NU's favor - they got the 1st visit, he loves the campus and academics and they pursued him as a QB from Day 1. Against them? Home cooking whenever he wants it.

Pursuing - Davante Borque ****, Keoni Bush-Loo **, Imani Cross *** - Powell committed to UCLA, but others have popped up on the radar in his place. The staff appears determined to add another big body along with Mike Marrow to complement the young speedsters. Borque is a Tennessee commit who is visiting Miami this weekend and is a longshot unless they can somehow get him to Lincoln for a visit on the last weekend. Bush-Loo is a tight end/FB whose rating may have more to do with the fact he is from Hawaii than anything else, and the need will likely be greater for him at the former position. Cross is a banger from Georgia with a pile of southern offers to go with NU. He likely stays in his region.

Verbal - Jordan Westercamp ****- After a dalliance with Notre Dame, either 1) their offer dried up or 2) he was doing mom a solid by considering it, but his heart was always with NU, depending who you believe. Whatever. Repeat after me - "They're kids."

Pursuing - Alonzo Moore **** - I list Moore here since he is listed as an athlete and is a possibility for the position, but he appears to be talking to NU as a CB. Given the number of young wideouts already rostered, the Huskers appear to be done here.

Verbal - Sam Cotton *** - I think we can safely say that verbal commitments don't get much more solid than this. A signing day switch here would result in a shovel over the head from Barney, the eternal scorn of Mama Cotton, a body shaving and soap in a pillowcase beatdown from Ben & Jake and a shifting of the tectonic plates along the San Andreas.

Pursuing - Bush-Loo - Nate Iese has committed to UCLA and Brent Wilkerson to Penn St. (huh?), so Bush-Loo is the final option. Given how thin the roster is at tight end, his commitment is a bit crucial. People should probably ignore the two stars in this case, given other schools pursuit of him. Bush-Loo visits Arizona this weekend and Nebraska next as the Huskers have snatched that visit away from Washington. I like our chances for what that's worth. Which admittedly isn't much.

Pursuing - Andrus Peat *****, Evan Goodman **** - I probably overshot our needs for this position when I said 3-4. I'm one of those guys who wants five O-lineman every class, scholarship limits be damned. I want a DEEP pipeline. However, some large signings at this position the last couple of years have left us pretty deep. No secrets here, Peat would be the gem of the class and compete for time immediately. His brother is here and his dad loves us - I think we get him. Or at least, I really, really hope we do. Goodman is an ASU commit who's also considering Arkansas and Nebraska. Low chance of getting him, but if we get Peat, no offense to Goodman, I'll hardly care.

Pursuing - Vincent Valentine ***, Aaron Curry *** - Valentine seemed to be a Husker lock before a Florida visit and what sounds like a healthy dose of negative recruiting from Muschamp. Illinois is also up there as well. Curry was being recruited by Rick Kaczinski at Iowa and that relationship has brought him into Nebraska's sights. NU really only needs one DT in this class, but if both of these guys want to come, they'll make room.

Pursuing - none - this position is sealed up

Pursuing - none - Done here as well. We lose a few after this season, and the staff apparently disagreed with my assessment that we only needed 2-3 out of this class. They do so often and are almost always right, but I forge ahead with my amateur speculation nonetheless. Two notes - 1) everyone is solid but apparently, one of Anderson's buddies got ahold of his Twitter login and tweeted "Where will I sign?" causing a legion of Husker recruiting addicts to melt down on message boards/choke on Runza's/weep uncontollably/crap themselves. So, yeah, kudos to you, random friend of football hero, well done. 2) I'm pretty sure no one seriously considers Michael Rose a 3-star talent after the Under Armour game. I mean, wow. Just wow.

Pursuing - Every high school cornerback with a sub-4.7 40 who is cancer-free Brandon Beaver ****, Raymond Ford ***, Devian Shelton ****, Alonzo Moore **** - The recruiting at this position makes my head hurt. And if my head's going to ache, then I want it to be because I abused myself alcoholically and forgot to drink a gallon of water and take my Advil, not because it's spinning from trying to read about the 48 cornerback prospects we're after. Leggett and Rios have committed elsewhere to thin the list. I'm just going to predict we get Ford and Moore and move on.

Pursuing - Sebastian Smith ***, Corey Thompson *** - Thompson is early aTm commit who has opened things back up. NU is pursuing hard, but it sounds as if a switch will be tough to pull off. Smith is a little more intriguing. From what I'm reading, he is an academic risk with a huge upside, who would be ranked much higher and have a stable of offers otherwise. If the academic situation works out, then NU could be in a great position where others have backed off. He's from Ohio, so Pelini probably has some insight that this might be the case, or else he wouldn't be pursuing this. I say he ends up a Husker and other schools end up kicking themselves.

That's it for now. I'll pop any commitments we get before signing day up on the front page.

For signing day, I'll set up a feed on the page to update the letters as they come rolling in. It's probably going to be a little more exciting than most years with everything coming down to the wire.

Once we've got everyone's name on paper, I'll begin posting the recruit capsules including film links, predictions for future success (generally way off base), and the always popular "Justin test" in which my buddy, Justin, rates his chances of kicking a particular recruit's ass - if he considers these chances good, that signing is generally deemed completely unsuitable for Nebraska's needs (kickers excluded).