Each week we will go over Nebraska's non-conference opponents and how they fared against their competition.

Once again, Nebraska's non-conference opponents had a fairly good weekend. If you want to complain about the non-conference schedule, just remember that Nebraska's current Strength-of-Schecule is 69 according to Sagarin's Raitings. Our next opponent Wisconsin? The Badgers are ranked 148 in SoS.

In Photos: ASU v. Chattanooga, Part One
The Appalachian State University Mountaineers fought a hard battle against the University of Tennessee at Chattanooga Mocs, but ultimately emerged from the scuffle with a close 14-12 win.The link above has photos of the game.

UTC (2-2, 0-1 Southern Conference) fell after losing 14-12 at No. 3 Appalachian State last Saturday. The Mountaineers remained in the third spot in both polls.

Defense gives Bulldogs a boost against Idaho - Fresno State Football - fresnobee.com
By limiting the Vandals to 57 yards and seven points in the second half, the defense turned a potential shootout into a convincing blowout. Even if the effort got overshadowed by Derek Carr's passing feats.

Fresno State Bulldogs: A Solid Performance Against Idaho Needs to Carry Over | National Football Authority
Carr, the younger brother to NFL quarterback and former Bulldog David Carr, had his first 300-yard game of his career completing 24 of his 37 pass attempts for 371 yards and five touchdowns.

Huskies | Maligned Washington defense stiffens when it needs to | Seattle Times Newspaper
Through what is now one-third of the regular season, the Huskies are giving up 67 more yards per game than they are gaining (453.2 to 386.2), have allowed 19 more first downs (96 to 77), have punted five more times and allowed three more sacks.

Husky Haul Power Rankings - Week 4 - The Husky Haul - A Washington Huskies blog
6. Washington- 31-23 win over California (3-1 overall, 1-0 in Pac-12)- With yet another final second victory by the Huskies, Steve Sarkisian is starting to establish himself as the "heart attack coach".

Busy bye awaits Cowboys - Wyoming Tribune Eagle Online
"It's a great time to have a bye," coach Dave Christensen said after the Cowboys lost to No. 9 Nebraska 38-14 last Saturday at Jonah Field at War Memorial Stadium. Nebraska moved up to No. 8 Sunday in the latest Associated Press poll. "We're 3-1. I like being 3-1. It's a pretty good position to be in."

I'm planning on doing a write of of the game against Wyoming. This is a picture of the view of the field from the great seat I got. Nine rows up behind the Husker bench. 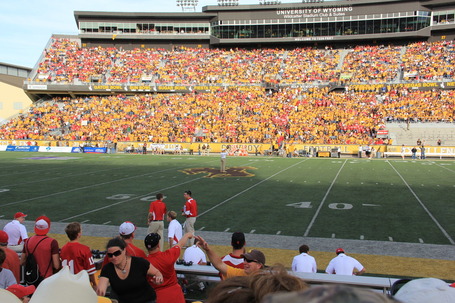