Know Thy Enemy: The Wyoming Q&A

Share All sharing options for: Know Thy Enemy: The Wyoming Q&A

Thousands of Husker fans are making the trek to Laramie, Wyoming this week for the upcoming Nebraska - Wyoming game. So many are going that I've been informed by a CN regular that hotels in Laramie and Cheyenne have been sold out, so if you're going, maybe you ought to pack a tent and sleeping bag.
SB Nation has a Wyoming Cowboys site - Cowboy Altitude - run by "The Road", Matt Hargleroad. The Cowboys are 3-0 coming into the game, something I found surprising after looking at them during the offseason and wondering how they were going to win a game with a true freshman quarterback. Matt was kind enough to fill us in on what's been going on with the Cowboys.
Q&A after the jump!

Christensen is in his third year is finally starting to have the personnel needed to run the spread offense. He's a no-nonsense guy that is very serious about players abiding by rules and is not afraid to suspend those who break them. He hasn't been the warmest guy towards the media and now only the first 30 minutes of practice are available for the media to attend. The early success in 2009 and the bowl win probably made Wyoming fans set the bar to high for 2010 and the drop to 3-9 created some doubters. I think he has embraced Wyoming and certainly think he has the program heading towards right direction and has brought in some great recruits.

Gregg Brandon is new this year and is a big time upgrade over Marcus Arroyo who was here for the first two years. He certainly deserves some credit for the success of the offense this year. He was the head coach at Bowling Green for several years and led them several winning seasons. Marty English a carryover from the Joe Glenn era and his biggest success has been in recruiting in Colorado. The defense struggled last year under English but he also had to adjust from the 3-4 to the 4-3 and the loss of the entire defensive line. This year the secondary is struggling but we lost three starters there.

Austyn Carta-Samuels looks like he's going to be the starter at quarterback, then suddenly transfers. In walks true freshman Brett Smith, and suddenly the Cowboys have a decent offense, Smith is 16th nationaly in total offense, and your team is 3-0 on the season. To what do you attribute the success - Smith's play, or are there other factors as well?

Brett Smith has certainly done a great job of managing the offense so far. His play has exceeded the expectations that we had for him. What has made his job a lot easier has been the greatly improved offensive line which has only allowed two sacks so far this year.

Bringing in Gregg Brandon has helped the play calling since he has such a deep background with the spread offense. It was really frustrating to watch the offense the last two years try and move the ball.

Is the running back by committee approach by design, or because one hasn't stood out more than any other? Of this bunch, who's impressed you the most?

The running back by committee is how things were supposed to happen at the start of the season. On the depth chart there is an OR listed between each name and they are all considered the #1 QB. Alvester Alexander has been the #1 the last two years and last year ran for 792 yards and 14 touchdowns. Now he can share the load with Ghaali Muhaamad who currenty leads the team in yardage. I have to say he has impressed me the most because he started at OLB last year and played safety as a freshmen. He also plays special teams and still knows to hit. We didn't see him practice at RB in spring or fall practice because he hurt his shoulder. Brandon Miller is the smallest of the three but the former walk on is quick and can take advantage of any opening he gets.

Wyoming has three juniors and two seniors on the offensive line. Do the starters have much experience, and is there much depth behind them?

The offensive line hasn't been very good for Wyoming the last years but they were playing lots of underclassmen before. Center Nick Carlson is a two year starter and named to the Rimington Trophy Watch list. Tackle John Hutchins and Guard Brandon Self are also experienced. Guard Josh Leonard has played the last two years but he is out this week.

There is some depth now which was missing these last two years. Tyler Strong played last year as a true freshmen but he actually played defensive tackle. Clayton Kirven shares times with Hutchins and he is senior who has played plenty before.

Sticking with the lines - two seniors and two juniors on the defensive line. Talk about their play and the depth behind them as well.

Josh Biezuns was named a preseason All Mountain West selection at defensive end and earned POW honors last week. He is getting some attention from NFL scouts and is the best of the bunch. Biezuns, Gabe Knapton and Mike Purcell all started last year. Knapton is listed at tackle but he played end last year and may slide at times as well. Korey Jones is listed as a defensive end but is really a hybrid who make line up on the edge or move back to linebacker. Jones has four sacks already and is in his first year at playing at a JUCO in Kansas.

There is plenty of depth at defensive end and you will certainly see Mark Willis and Sonny Puletasi get some playing time. Both are underclassmen but have made some big plays this year. 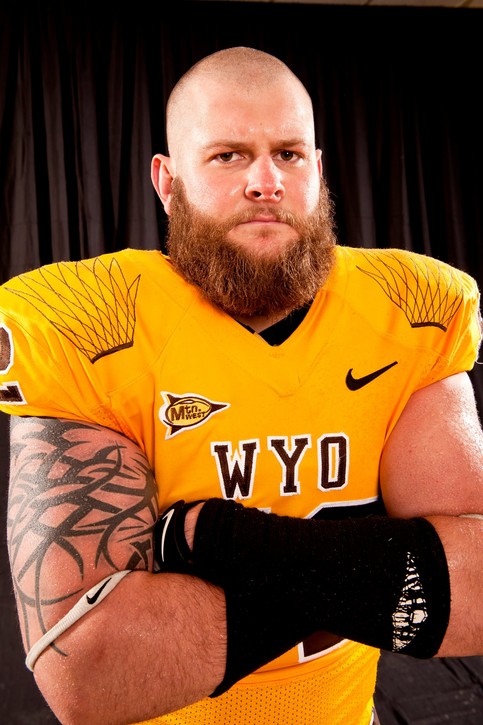 Does defensive tackle Gabe Knapton's beard have its own name? Its own scholarship? (Do I need to mention that's Knapton to the right or is that obvious?)

He's been growing it since Christmas and doesn't have any plans on cutting it. No special names that I'm aware of but I'm sure it gets nice and smelly during games and provide a nice snack once in a while after a meal.

Much gets made about the altitude in Wyoming. Is it that big of deal, or a little bit overblown?

Texas certainly felt the effects of the altitude when they were here and some players were throwing up on the sidelines. Mountain West teams like San Diego State and TCU certainly don't like playing in the elevation of Laramie. I know that Nebraska used to always play in Boulder but Laramie is another 1800 feet higher. Players and fans will certainly feels the effects of playing or tailgating at 7220 feet.

Care to give us a prediction?

This is same prediction I gave for the podcast. Wyoming will cover the spead (currently -23) but I still think Nebraska wins. 35-24 is my guess.