Black Out Against Wisconsin? - Just Say No (Voting Recommended, However)

Share All sharing options for: Black Out Against Wisconsin? - Just Say No (Voting Recommended, However)

In this morning's Nebraska Alumni Association email newsletter/spam comes a call for a "Black Out' when Husker fans travel to Madison on October 1st for the first ever Big Ten football game against the Badgers:

This makes our trip to Madison a unique and rare situation for our fans and one that calls for a solution. The Huskers love the Sea of Red tradition, but want to be visible to the coaches and players and a national television audience. Simply choose your favorite Husker black item from your closet or visit your favorite local Husker shop to purchase something new.

We also have a good selection of Blackshirts gear at http://shop.huskers.com. Thank you for your support and remember to "Pack Your Black" for the Nebraska game at Camp Randall and make a difference as we open Big Ten Conference play.

I plan on attending the game in Madison, and I will not be wearing black. Black is not an official school color, and even though Corn Nation has it's own store and could capitalize (somewhat) on a black out, I am not going to buy another shirt or pullover (honestly, October 1st night game in Madison? How could is it going to be? Colder than you wearing a t-shirt, that's how cold).

Husker fans who are attending that game are already having to pay exorbitant prices for tickets and hotels, and now we're being asked to shell out more money for black clothing. A failure to do so can be seen as a failure to support the team. That's just a little more than obnoxious as hell, isn't it?

The idea that Husker fans should wear black so they can be visible to the team and a national television audience is a set up for failure. There will be plenty of fans like myself who won't be wearing red and if the expectation (me -always about expectations) is set that the stadium will be dotted with black all over and it isn't - then the whole idea sounds pretty dumb, you know... kind of like that whole "Red Out Against The World - Beat Texas" concept the athletic department conjured up last season.

Bo Pelini's teams have played well on the road since his arrival. I doubt that has much to do with what color the fans were wearing in the stands.

While I will not be wearing black, I am interested in hearing your point of view on the matter. Please vote and let us know what your plans are, or what you would do if you were going. 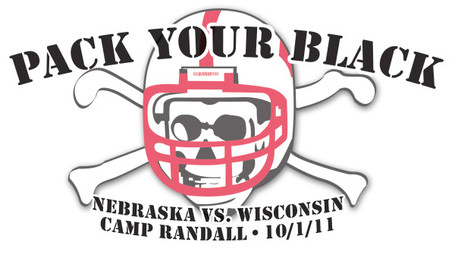