Share All sharing options for: Corn Flakes: The Day After Fresno State

Lots of Big Red Angst around the interwebz today. Concerns about both lines now, toughness, the boom or bust offense, coaching, but also some hope with the play of some of the youngsters on the offense. 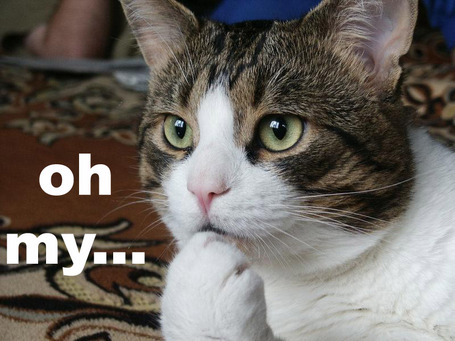 The cats are concerned...

Jon summed up things pretty well in his over-reaction thread. I'll add this, Nebraska won against Fresno State's best game. Is there anything more Fresno State could have asked for? No turn-overs, few penalties, Carr made excellent decisions, a special teams TD, and NU still won. Nebraska almost looked like they showed up to play, and still won.

Let's break it down.

The Huskers showed good resiliency in pulling this one out, and it was good to see their offense rev up when needed. But you wonder what's going on with that defense. Nebraska players spoke confidently this summer about being able to defend Big Ten offenses. But we didn't see that Saturday night.

While you're at it, let's ponder that top-10 ranking. Nebraska frankly didn't look like that caliber of a team for much of the night.

Shatel: Thrills and chills with Martinez at Husker wheel - Omaha.com

The rest of the best and worse reactions after the jump.

He caught the kick 2 yards deep in the end zone, burst through the middle and then down the right sideline. Battling leg cramps, he cut back to the left inside the 10 and crossed the goal line as Davon Dunn brought him down to finish the fourth 100-yard kick return in program history. "I had to get to the end zone," Abdullah said.

The first of many to come?

Nebraska KR Ameer Abdullah: The freshman came of age against Fresno State. With the Cornhuskers clinging to a 28-26 lead in the fourth quarter, Abdullah went 100 yards for a kickoff return touchdown. That gave the Nebraska some much-needed breathing room in a 42-29 victory.

Husker Mike's Blasphemy: Against Fresno State, The Kids are Alright

All told, it was a win, but it's not a win that gives you a lot of confidence that this team is ready to compete in the Big Ten in October and November. We saw a few flashes of potential in the second half, but those flashes must become more consistent over the next couple of weeks.

"That was obviously their game plan — max protect and roll him out and try to put our DBs on an island," NU defensive coordinator Carl Pelini said. "They had a good scheme to negate our pass rush."

"Our offensive line helped run it right down their throat," said Bulldogs coach Pat Hill. "There weren't any trick plays or reverses. It was straight ahead, off-tackle, dive football." Fresno State's young offensive line opened holes, and Robbie Rouse consistently gashed the Huskers up the middle. Husker defensive coordinator Carl Pelini said one play hurt the Blackshirts. And Fresno kept running it. Nebraska didn't prepare for it. The linebackers had trouble adjusting.

One play? Really our defensive brain trust couldn't come up with a way to stop 1 play?