Texas A&M to leave Big XII on Tuesday to form "A&M and the 7 dwarfs" Conference.

Share All sharing options for: Texas A&M to leave Big XII on Tuesday to form "A&M and the 7 dwarfs" Conference.

Even though it was debunked this morning, there are lots of reports that A&M is leaving today or A&M is leaving this week or A&M is just waiting for the plane from OU to head back to Norman before it would announce it is leaving the Big XII for the SEC. However, I have it on not so good authority that A&M does plan to leave the Big XII, but that it will not join the SEC.

Instead, the Aggies plan on forming a new conference called the "A&M and the 7 dwarfs" Conference. The (un)official press release from the office of R. Bowen Loftin after the jump.

"We here at Texas A&M University will be withdrawing from the Big XII and form a new conference. You see, in the time that has passed since this whole thing started, we realized that we don't really want to get away from Texas. We want to be just like them. In order to do this, we have to form our own conference. We are Texas (A&M) after all. It's our birthright to lead the small people of this world simply because we live in the Sun Belt (a wasteland of territory that stays above 100F for extend periods of time and has no water). It's going to be the best-est conference ever. There will be a total of eight schools and will bring the finest competition and excitement to our alumni and fans.

There have been discussions with the current Texas Conference commissioner, DeLoss Dodds, about having a conference alliance. In order for each conference to have eight schools, the Texas Conference will have to drop another member. It is such a stable conference that they actually have to lose one member in order for this to work out. So, we have decided that the A&M-and-the-seven-dwarfs (A&7 Conference) will pick up a former Texas Conference school for a marquee game. In a series of discussions, it was decided that Iowa State would move to the A&7 conference and be the marquee match up on the weekend of Thanksgiving. The ISU administration is thrilled about this move as they will be guarenteed $2 million in TV revenue annually by joining the new conference. Texas wants to rename their conference to the Texas Hold-em Conference to signify the strength of Texas and the seven cards in played in the game other seven schools held hostage in the conference. The rumors are not true that the Texas Conference will be renamed "The Best Little Whorehouse in Texas".

The apex of this conference realignment will happen the first Saturday of December when the champion of the A&7 Conference (ideally Texas A&M) meets up with the champion of the Texas Hold-em Conference (ideally Texas) in a game that we will dub the "Big XII Title" game. The winner of this game, of course will go on to the BCS title game where they will wear their home uniforms. The loser of this game will play in the Cotton Bowl which will become the fifth BCS game.

We are incredibly excited to form our own conference and to start up our conference television network. It will be called "Sheep-TV" and will feature Texas A&M athletics.

What schools will be in the A&7 conference? Well, our wish list includes schools such as Notre Dame, Arkansas, USC, Michigan, Ohio State, and Florida. But, in case our invitations are turned down, we have a list of back up schools that includes, SMU, Houston, Texas State, Texas El-Paso, TCU, and A&M Corpus Christi. Either way, we should put a very appealing product out that the whole nation will tune in to see." 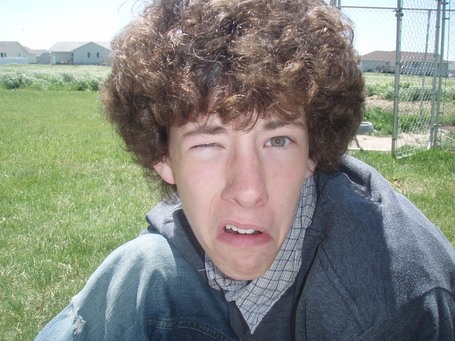 I asked Brad on the street what he felt about it and he simply replied, "This move will help us in recruiting! We will be able to tell recruits that they will play in the best conference in America and will be able to stay in state! Not only that, we will make a ton of $$$ with this move because of the appeal of Texas football nationally and people will take us seriously again!"

There were some people upset by the move, though. Up in Norman, OK, there was an outcry about OU being relegated to just another member of the pack. "We're Oklahoma! We're not one of the Little Sisters of the Poor!" Texas Conference Commissioner DD, simply responded, "Don't forget, if things fall apart, Texas and Notre Dame will start a new conference and Texas and Notre Dame will play on the day after Thanksgiving. Nowhere in those "press releases" does it mention OU, so learn your place Sooners and get back in line."

And finally, in a joint press release from both UT and A&M we find out just how valuable they are to the rest of the known universe.

"In a major collaborative research effort, it was discovered by UT and A&M scientists that the universe does indeed revolve around a point in between Austin and College Station. The exact point is still up for debate, but it's somewhere in that area.

Also, once again, the college football world has been saved from the Super-Conference era by the universities in Texas. The schools under the wing of Texas have been saved from the abyss by the strong arm of Texas pulling them up from the edge. A&M has provided a lucrative opportunity to be in a BCS league for a bunch of worthless deserving universities that may have never been given this opportunity otherwise. Please know that as long as we are here, everything will be ok."