Share All sharing options for: Corn Flakes: Hot Outside? Try Some Cool Links! 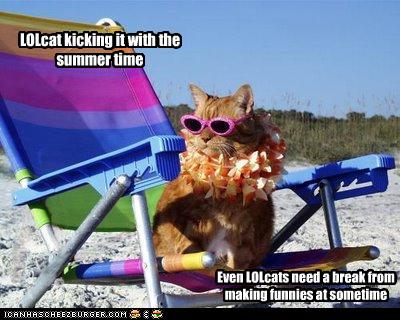 We can't all go to the beach, so try some links instead.

"I came here to get a degree, and it'd be pretty bad to go four years of school and have nothing to show for it," Crick said. "They wanted me to get my degree, and I wanted to get my degree. Another year under my belt couldn't hurt at all, especially with the lockout situation."

When we were in the SEC, we had some big-time games, week in and week out. We would play Florida, Tennessee and Alabama back-to-back. When you go through that, you learn what it's all about. It's about linemen, not about the skill guys. Whoever has the most athletic linemen gets the upper hand. Bo's known that forever.

Arkansas State and Southern Miss? ...... DAMN YOU STEVE PEDERSON!1!!1, erm, wait, what? Yeah either the powers that be decided that moving to the Big 10 means we continue scheduling as before with the Big 10 being a harder slate, or they found that scheduling is a lot harder, and/or more expensive than they thought.

THAT THING NOT CALLED FARMAGEDDON

To be fair, there are some elements of "The Heroes Game" that are not objectionable -- that are even praiseworthy. Recognizing the good deeds of individual Iowans and Nebraskans is nice; leaving aside the maxim that good deeds are worth doing with or without recognition, there's nothing exactly wrong with celebrating good deeds. And raising money for the Nebraska and Iowa chapters of the Red Cross is very commendable; the Nebraska-Iowa games are going to generate a lot of interest and excitement (and, oh yeah, money), so putting some of that to genuinely good use is a fine idea.

Nebraska-Iowa game to be called the "Heroes Game." Seriously? | Yardbarker.com

Nebraska has better corn, and our farmers work harder.

Hey, I heard the Huskers have moved to the Big Ten. I can't tell you exactly when I first heard this juicy little tidbit. But then I heard it again. Andagainandagainandagain.

Well I'm out of room on the front page. We can't have cats and such silliness taking up too much room. BTN news after the jump, and I'm sure I'll post something that we outrage you, but what will it be?!?

"There’s a lot of stuff going on," Nebraska defensive tackle Jared Crick said. "We don’t know about it. We want to play Nebraska football. We don’t care what’s going on. We’ll get everybody’s best shot anyway."

All is love and roses now between the Big Ten and its newest member, Nebraska, and the relationship plays out on the league’s own television network like a mushy teenage crush.

Or have they?  Great teams beat great teams.  Or they don’t play them at all.  In the BCS era, those are your two choices for winning a title.  Nebraska has become quite good at exploiting one of those things, and not so good at the other.  And that’s where they’ll face a bigger challenge than most assume entering into the expanded Big Ten.

Could be taken as a link-bait article, but it could be true. We have been playing in an easy division for many years, and the Big Ten will be a lot tougher than we've had it in the Big 12 North. But, as Bo Pelini would say - "time to step up". - JJ

When you’ve never played at a stadium, never played with the slight nuances most fields have (sight lines, turf, etc.), crazy, unpredictable things happen. And Big Ten commissioner Jim Delany didn’t give his new team any help with road games against Wisconsin, Penn State and Michigan—the three quirkiest (and loudest) stadiums in the Big Ten.

Switching conferences will not change that. Nebraska switched for all the wrong reasons, but in the end we all know money was one of the biggest factors in it.

The bold advertising campaign for Dan Persa's Heisman candidacy is putting attention on Northwestern now. That will raise expectation levels and pressure on this veteran team.

Northwestern is touting Dan Persa as a Heisman candidate. Think about that for a minute, then think about your attitude towards Northwestern. Perhaps it's time to change it? - JJ

Ever since Jim Tressel was caught covering up his players' felonies improper trinket and equipment sales which led to his subsequent dismissal resignation retirement, the outside world has been aghast at Ohio's reaction to its shamed coach: They still respect this liar?

At first I thought this was going to a bit involving moral relativism of the "your beloved coach isn't any better than my beloved coach" variety, but Eleven Warriors does a good job of showing us why Ohio State fans still love Jim Tressel. He makes some good points about how some genuinely bad people (as in Lou Holtz, whom I will never watch) are heralded despite being... bad people. - JJ

Director of Officials Bill Carollo mentioned there are 17 rule changes this season, focusing mainly on new taunting and clock policies. In the past, a taunting penalty was assessed after the touchdown on either the extra point or the kickoff. Now, if a player taunts an opponent or draws attention to himself prior to entering the endzone, the penalty is like a clipping penalty, Carollo said. The touchdown is taken away and a 15-yard penalty is assessed from the point of the foul. Carollo also pointed out when there is less than a minute remaining in the game, penalties will now result in a runoff of 10 seconds.

Cable ONE to Carry BTN in Norfolk - Big Ten Network

Cable One in Norfolk, Neb., and Big Ten Network (BTN) announced today that the network will be available on the Cable One’s Expanded Basic package for customers in Nebraska by September 1, 2011.