A Positive Spin on the Nebraska - Iowa "Heroes Game".

Share All sharing options for: A Positive Spin on the Nebraska - Iowa "Heroes Game".

So about this whole "Heroes" theme. It can work.  We can make it work. The head honchos come up with the basics and leave it to us creative bloggers/readers to work in the fine details.  When I first heard about the offical name of the game played between Nebraska and Iowa, I was very skeptical. But, now that a little time has passed and I have had the opportunity to rationalize this, I know that we can take what they started and make this into a very exciting tradition.

As a side note, I feel partially responsible for this "Heroes Game". We here at Corn Nation came up with a few ideas for a rivalry trophy back in March.  Part of that article paid homage to a great American hero, Ameri-Stanzi. And because I loved the video so much, I'll embed it here for the newcomers to our site.

So why is it my fault?  I wanted my idea to be heard by the AD's of each school, so I sent their marketing departments links of what we had done.  And since other people had also posted on the articles, they had a lot of good material to work with. But Ameri-Stanzi was apparently perfect for them. The chance to elevate Iowa and Nebraska to a heroic level was an opportunity too good for the administrators to pass up on. Now we are stuck with it. It could be ok, though, right?

Isn't it good to honor people that have done great things? We don't even know what the trophy will look like, but we already hate the idea. It seems so...nontraditional. When we think about heroes and memorials, we already have things in place to honor people. We name our stadiums after them. We write songs and poems and take moments out of our lives to remember people. We lay wreaths and flowers in places where people died or where great battles were won. Heck we even make statues of them. 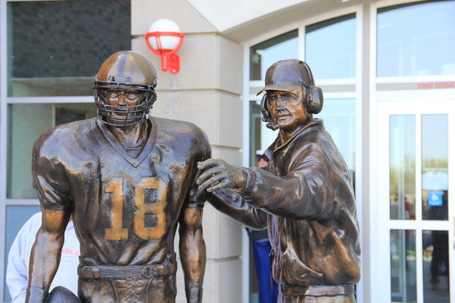 It's so un-B1G like and I think that's what is really eating at people. Purdue and Iowa talked about a trophy but decided against it. They wanted to develop it over time. There's no magical/mystical story behind it. It's not some old relic that both schools can share or claim. It's not something that is unique to both Nebraska and Iowa. Being a hero isn't unique to Huskers and Hawkeyes and that's what makes this trophy so...bland. I personally don't care what was decided on for a trophy, but I wanted it to represent something that Iowa and Nebraska shared that no one else could claim.  What makes this game different than all of the other games in the NCAA? That's what needed to be in focus.

It's going to be considered pompous and arrogant by everyone else in the country, even people in our own conference. Donating money to the Red Cross Missouri River Relief is fantastic. Honoring a hero in each state is awesome. Having a sponsor like Hy-Vee help out with this is great. Calling our game the "Heroes Game" takes away a lot of that.  It makes me cringe that our trophy is attached to that. You could call any sporting event the "Heroes Game". I for one think that maybe the Army-Navy game is better suited to be called the "Heroes Game" than Nebraska-Iowa. Nebraska will never play in the "World's Largest Cocktail Party." We ain't got no shrimp here Bubba. Iowa will never play in the "Red River Rivalry" because there isn't a Red River dividing them and a rival. There's no reason we should put ourselves up on a pedestal that anyone else can stand on. The game needs to be called the Iowa-Nebraska Game and the rivalry trophy needs to have it's own separate meaning that both schools can relate to and cherish that no one else can be apart of.

It needs to be desirable. If it's not, it will become the Land Grant Trophy. Each side has to want it and I mean want it. It needs to be just like two guys chasing after the same woman. The loser is going to be heartbroken. When Penn State loses to Michigan State, it sucks for them, but losing the Land Grant Trophy isn't really a big deal. Our "Heroes Trophy" could easily end up this way because it won't be special and unique. If we beat Iowa this year, why can't we put up our "Heroes Trophy" against Northwestern when we play them next year?  They have heroes, too.  We can raise money for a good cause and honor a hero from Chicago and Nebraska.  Or what about Indiana or UCLA or Wyoming?

When Iowa beats us, I want to feel like they have just stolen something special that belongs to us. I want it to rip my heart out and I want to think about how we will get it back next year. I don't want to think "Well, it would have been nice to have won that trophy, but it's a nice respectful rivalry and it's good to see Iowa win it, and to get to see the individuals recognized for their efforts towards the community." Suck it Iowa. I want to beat you, and take this trophy and brag about it over the next year until we beat you again. None of this politically correct nice guy BS. if we're going to make this rivalry thing work, let's do it right.

We all know how administrator's work. They spend way too much money on stupid stuff that they love. This trophy isn't going anywhere because it's their legacy or some bull-pucky. So how do we take the AD's idea and make it better?  Well, the first thing that has to happen is that the "Heroes Game" title has to go. I would be completely ok with everything else they said this morning if they hadn't called the game the "Heroes Game". I would have lived with it. However, the name belongs in Philadelphia, Pennsylvania on the first (or second) weekend in December when Army and Navy match up and we have fire fighters and police officers lining the sidelines. It doesn't belong at a game where a whole two people are honored for their works. I do, however, love that SUI and UNL are going to do that and I love raising money for good causes, but being a hero isn't unique to Nebraska and Iowa, it's not right to claim the name. Call it the Nebraska-Iowa (or Iowa-Nebraska) game and let that become a brand that people across the country will associate with doing good things.  "Did you know that every year the Nebraska-Iowa football game recognizes people in their communities and donate gobs of money to charities.  The people there are wonderful and do a lot of good things to help others. It's great!" Let that be their branding.

As far as this trophy is concerned, I have no idea what it's suppose to look like, but I'm going to assume that it has something to do with either 1) Heroes of Nebraska and Iowa or 2) something deemed heroic. Either way, all I can imagine is some ugly bronze or marble mug of some "hero" that really doesn't look anything like the person it's suppose to be. If I were a football player, I sure wouldn't want to be carrying some ugly head around after a football game. Unless it was like the head of Medusa. That would be pretty cool seeing everyone in the stadium look away as some player swings the head around for all to see.

Also, the press release talked about engraving the honorees names and hometowns on the trophy. Are they planning on putting the scores on there too? I'm imagining this big head on top of a block of wood four feet high in order to accomplish all of this. Dump the head and let's just play for laurels like they did in 1891. Champions and heroes use to wear them, why can't they now? The laurel can be mounted on top of the trophy and can come off so that the players can take turns wearing it. You could get a lot of names inscribed on a small block of wood and inscribe the scores on the leaves of the laurel. You want heroes associated with a football game?  Let's make 'em on the field and talk about them in 20 years. Eric Crouch would have won the Laurels back in 1999.

So let's honor the heroes of our states, help the Red Cross (or whichever charity they choose in the future), and buy all of our groceries at Hy-Vee, but let's also make the trophy worth fighting for for the players and something to desire and brag about for the fans. Give them the chance to wear the laurels and to enjoy their victory in the "Nebraska-and-Iowa-Honor-The-Heroes" Game.