Share All sharing options for: Big Ten Countdown: 26 - Iowa and Nebraska used to play for laurels.

On September 23, 2000, Nebraska beat Iowa 42-13. This would be Nebraska's 26th win against the Hawkeyes and up the overall record against Iowa to 26-12-2. Starting this year, we replace the Buffaloes with the Hawkeyes to finish up the regular season. It should be a fun game.  People on both sides are eagerly anticipating it. To top it off, the game will be played on the Friday after Thanksgiving. This will give the Iowa-Nebraska game the spotlight that the Big Ten wants. Yet another showcase game that could turn out to be a nationally popular game every year.

So I decided to do a little research for this story and the first images that popped up for Nebraska-Iowa happened to be from that 2000 game.

Now to be fair, Nebraska had a pretty darn good team that year and Iowa had just started the Kirk Ferentz era. Besides, there were no digital cameras in 1891 to record Iowa's beat down of Nebraska 22-0 in Omaha. But there was at least one newspaper article from the Omaha "Daily Bee" on November 27, 1891.

It's kind of hard to read so you can click on the link above to get a .pdf to zoom in on. These old articles are always kind of fun to read.  Some of the highlights:

Victory perches upon the banner of Iowa.

The sky was overcast with a film of leaden clouds, rendering the light of that mellow character best suited for the visual organs when put to a prolonged and severe strain.

Translation: The sun was bright. (Apparently they didn't have a word for eyes back then.)

One drawback to the situation was that both colleges met flaunting the same colors -- old gold -- making it an impossibility, so far as the crowd went, to distinguish friend from foe....Again, there were no provisions made for keeping back the crowd and as a result about half the game was a veritable scramble between the crowd and the players to determine who should have the possession of the grounds.

After the regulation ten minutes rest, the field was again partially cleared and the battle resumed.

Translation: Nebraska went by a lot of names back in their early days.  Gold was one of their colors and they were known for a brief time as the Old Golden Knights. The "Marred the Occasion" paragraph is basiclly the author complaining about how things were set up kind of half-assed.  No one knew where the field began and ended because it wasn't marked properly.

Also, it would appear that there weren't too many stands (if any) and that the spectators just kind of lined the field or were actually on the field where the players weren't playing at that time.

In Flippin, the colored half back, the Lincoln brigade has a player of whom any eleven may be proud. A man of herculean mould, with muscles trained to the hardness of iron, a level head and a pair of legs on him that are capable of covering ground with a speed that might be likened unto the Nebraska winds when out for a little blow over the measureless prairie.

It requred but a short time after this for Iowa to run her total points up to 22. By the longest run of the game the ex-governor's son carried the ball clear to the five-yard line, German succeeding immediately thereupon with another touch down.

I find it interesting that there are so meny references that relate to war in the old newspaper articles regarding football. It's almost like a game of football is some reenactment of a battle.

Phalanx after phalanx of men and boys

The rush and whirl and the general hurly-burly of the battle, as one side or the other advanced or fell back, keep all the senses alert and the blood bounding through one's veins in such torrents as to preclude all thoughts of frigidity or discomfort

Possession of the grounds

the better team carried off the laurels 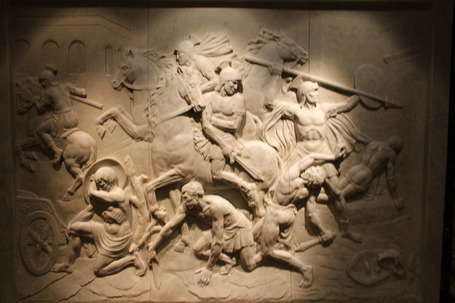 Any who, according to this article, Nebraska and Iowa play for laurels. Of course, that may just be a figure of speech, but it wouldn't be a bad reward. If you hand out a laurel to the winning players, they probably wouldn't sell them on Ebay since they would start to wither within a few days.

By all odds, the better team carried off the laurels, but in asserting this no disparagement is meant to the doughty Nebraska boys, for they made a heroic struggle, and had they not been so inestimably on the upper side of the scales, would certainly pulled out a victory.

For excellent and effective work behind the line, Larrabee took the laurels, his rushing and tackling being superb, but in punting he was no better than White of the Nebraskas.

This could be kind of cool I guess. Maybe the winners can stop by Caesar's Palace in Vegas on the return trip from the Rose Bowl. Laurels on their heads, roses in their mouths. I can't think of any possibility for an NCAA infraction to occur there.

Iowa-Nebraska is gonna be fun and I look forward to many years of putting the Iowa State beat-down on our new conference rival from the Cyclone State.