I remember my first Husker game at Memorial Stadium. I was a freshman in the marching band in 1996. The team had just come off its second national title and Michigan State was coming to town. We creamed the Spartans 55-14. As a side note, Nick Saban was the coach on the Michigan State sideline that day. I won't go into the Disaster in the Desert that happened the following week.

This was back in the days when the band director use to say, "Everyone comes here to see the band because they already know what the score of the game is going to be." So here I was at my first Husker game and when the tunnel walk started, I had chills running through me.

When I went to school in Lincoln, the Husker's locker room was in the south end zone.  With the north stadium remodel, the north end zone became the teams' gathering area. There are a couple more traditions during the tunnel walk that even some Husker fans may not be aware of.

The first of these traditions is touching the "Lucky Horseshoe". The horseshoe hangs above the door of the locker room next to the red carpet.  During the tunnel walk, players jump up and touch the horseshoe for luck. There are usually security guards present inside the locker room hallway, but if you ask nicely, they will usually let you get a picture of the horseshoe if you want to see it.

There are a few stories about the horseshoe dating back to the 1970's. The story that I've heard about its origin dates back to the construction of Memorial Stadium in 1923. It was found in the dirt at the location where the stadium was to be built and so it became part of the history of the stadium. I don't know if it's completely true or not because the story behind the horseshoe has kind of faded into obscurity. It's just something that has always been there. 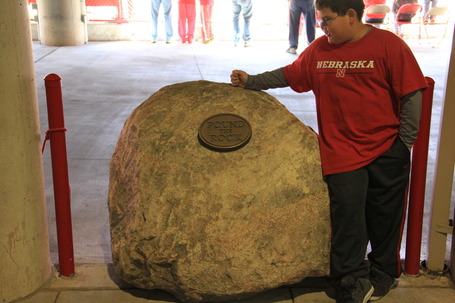 The other tradition "Pound the rock" is a saying that refers to our RB/FB's taking the football (the rock) and "pounding" it downfield. This tradition actually started during the Callahan era. I know that's crazy, but it's cool and has some significance. The above picture of "the rock" is right outside the Husker locker room and the team walks by it before the game. It servers as a reminder to work hard and give it your all. Hit your opponent hard enough to bust the rock. Pound them into submission.  It is also a reminder of what past Cornhusker teams have been able to accomplish simply by running through their opponents.