In 1931, Nebraska won the Big 6 title. Oklahoma finished dead last (not relevant, but I have to throw it in there). The Huskers did have two non-conference loses. They would be dismantled by Pittsburgh in what was, at the time, the worst loss in Husker history. The team also traveled to play Northwestern University in Evanston, Illinois, for what would be the only time in history that the Huskers would lose to the Wildcats. This was also the only time Nebraska would play Northwestern in Evanston. That will change with the 2012 season. The two schools have only meet up four times with the most recent game being at the Alamo Bowl on December 30th, 2000.

Well, Northwestern is going to become one of our new divisional rivals. We get to play them every year which means a trip to Chicago every-other year. Not too shabby. Northwestern has been a decent football school since the world began in 1995 and should produce some good games that don't end in a 66-17 score. That's approximately the same time when our old divisional rivals, the Kansas State Wildcats, started to finally field a respectable football team too. Of course this brings us to the Terminator 2 dilemma.  If Northwestern football began in 1995, did they really beat us in 1931?

At the center of this new rivalry, will be "NU". The Wildcats claim "NU" because it is an abbreviation for Northwestern University. Nebraska claims NU because, well, that's just what we've always used. If you don't like it, blame the guy who wrote our fight song long ago.

That song was written in 1924, LONG before Northwestern ever started playing football (1995). Now I'm not ever gonna tell a Northwestern fan (not abbreviated NW by-the-way) that they can't be called NU, but I would like them to be ok with us calling our Huskers, "NU" (pronounced En-Yoo).  It was on our football helmets for a bit in the late 60's which, again, was long before Northwestern football was around. 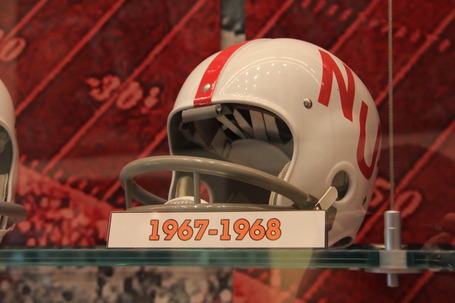 I'm all for getting along with our new "rival", but if we want to spread a little hate, we could play for the right to be the "NU" school. Or, if SBNation ever allows us to type in a different color easily, we could just abreviate Nebraska as NU and Northwestern as NU. That would make things pretty simple and straight forward.

Now, for the record, I'm ok with the whole UNL thing and I'm not going to go as far as Iowa and call them jNW. But, if this whole NU-NU thing gets outta hand and Big Ten fans start to despise Nebraska because we are kicking them around the football field, people might start to call Nebraska "tunnel" or tUNL like they call their current overlord tOSU.