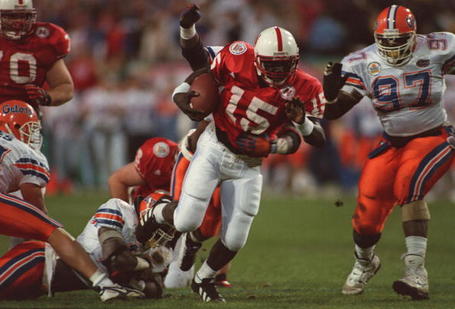 Jon J: The article after the jump was originally written by Husker Mike with the idea that Frazier was a slam-dunk selection on this year's College Football Hall of Fame ballot. It was all prepared and ready to go, but apparently the Hall of Fame voters decided that Frazier didn't belong.

I don't have anything against Eddie George, Deion Sanders, or any of the other guys who made it, but how do you not vote for Tommie Frazier after the resume he had as a college quarterback?

I've included the criteria for Hall of Fame voting entry at the end of the article. I'll let you be the judge.

To many in college football, it was a surprise that Tommie Frazier wasn't already in the hall-of-fame, so it was clear that when Frazier was announced as a candidate, he immediately jumped to the head of the class. How could you argue against the man? He was the MVP of the 1995 Orange Bowl and the 1996 Fiesta Bowl...and frankly, a strong case could be made that he should have been the MVP of the 1994 Orange Bowl. For those of you that have forgotten, all three of those games were for the National Championship.

Frazier took over as Nebraska's starting quarterback in a road game at Missouri in 1992 as a true freshman. His first start in Lincoln was Colorado's "Nightmare on 10th Street" on Halloween night 1992, when the Huskers demolished the eighth ranked Buffaloes 52-7. One week later, Frazier repeated the feat by defeating #15 Kansas 49-7 to get the attention of the college football world. But freshmen being freshmen, the Huskers lost the next week to Iowa State in a stunner. It was the only regular season game Tommie Frazier would lose as a starting quarterback. In 1993, Nebraska would go undefeated in the regular season and unrespected nationally. National pundits didn't see any reason why Nebraska should have been ranked #1, with many openly calling for #2 Florida State to play #3 Notre Dame for the title. Nebraska was a 17 point underdog to the Seminoles, but from the opening snap, Nebraska proved they belonged on the field. Frazier outplayed Heisman Trophy winner Charlie Ward that night, but when Byron Bennett's 45 yard field goal hooked left, Ward and Florida State walked off with the glory.

Meanwhile, Nebraska and Frazier fumed and fumed after arguably outplaying the Seminoles, vowing not to let that happen again. "Unfinished Business" was the motto that drove the Huskers through the summer of 1994. The Huskers seemed to be rolling back towards another national championship run when Frazer left the Pacific game with a leg injury. Except it wasn't a minor injury; Frazier ended up in the hospital with blood clots, and Frazier would miss the rest of the regular season. Brook Berringer played well the rest of the season, and the reward was that Frazier and Berringer would split time in the Orange Bowl against the home-town Miami Hurricanes.

Frazier would start the game, but the game was nip and tuck. Berringer played the second and third quarters, seemingly wearing down (and out) Miami. When Frazier returned to the game, he was fresh and Warren Sapp and the 'Canes were out of gas. Sapp reportedly asked Frazier "Hey Tommie, where you've been?", with Frazier apparently responding with "It ain't where I've been, it's where I'm going." And led by Frazier's fresh legs, Nebraska mounted a fourth quarter comeback to beat Miami on their home field to win the national championship.

In 1995, Frazier's health held on and he started all 12 games that season, and Nebraska was never seriously threatened that season despite playing top-ten Kansas, Kansas State, and Colorado that season. Frazier would finish second in the Heisman Trophy balloting to Eddie George, though later on, many people wished they had that vote back. Nebraska earned a berth in the Fiesta Bowl to play Florida for another National Championship, and once again weren't getting much respect. Oddsmakers thought Steve Spurrier's "Fun and Gun" offense was too potent to keep up with Nebraska's old-fashion option offense.

Well, all Tommie Frazier did was seal his place in college football history with a memorable performance in a National Championship blowout victory, as the Huskers won 62-24. The capstone of the evening was this 75 yard run by Frazier as he broke tackle after tackle.

Frazier's blood clot problem would flare up again in 1996, and his football career came to an end. He went on to be an assistant coach with Baylor under former Husker assistant coach Kevin Steele. The lack of a pro career does nothing to impune the college achievements of Frazier, who's considered by many to be one of the greatest players ever at his position.

And now his place in college football history is finally cemented with his election to the college football hall-of-fame. In the words of Warren Sapp, "Hey Tommie, where have you been?" ... because it's an honor that's been long overdue.

1. First and foremost, a player must have received First Team All-America recognition by a selector organization that is recognized by the NCAA and utilized to comprise their consensus All-America teams.

2. A player becomes eligible for consideration by the Foundation's Honors Courts ten years after his final year of intercollegiate football played.

3. While each nominee's football achievements in college are of prime consideration, his post football record as a citizen is also weighed. He must have proven himself worthy as a citizen, carrying the ideals of football forward into his relations with his community and fellow man. Consideration may also be given for academic honors and whether or not the candidate earned a college degree.

4. Players must have played their last year of intercollegiate football within the last 50 years*. For example, to be eligible for the 2010 ballot, the player must have played his last year in 1960 or thereafter. In addition, players who are playing professionally and coaches who are coaching on the professional level are not eligible until after they retire.

5. A coach becomes eligible three years after retirement or immediately following retirement provided he is at least 70 years of age. Active coaches become eligible at 75 years of age. He must have been a head coach for a minimum of 10 years and coached at least 100 games with a .600 winning percentage*.