Share All sharing options for: Big Ten Countdown: 51- Times Minnesota Has Played Nebraska Making Gophers More A Rival Than Most

We have played Minnesota 51 times. That's a lot. It was touched on briefly in a previous post. I still can't get past the fact that even though Ohio State and Minnesota have been in the same conference since 1912 (99 years!), yet Nebraska has played the Gophers more than the Buckeyes have (50 times).

Minnesota leads the series 29-20-2. At one time they led 29-6-2 until Nebraska put together its current 14-game series winning streak. So what where the early games like? Well, the first game in the series earned a footnote in the McCook Tribune. Apparently we (or someone on our team) was called the "Grophers" while Minnesota was known as the "Millers". It's interesting to see football as foot-ball and how the author makes it sound like a Shakespearean play with "heroic fights" and "tragic scores". They had 15 pounds per man on us? So in 1900, does that mean that their center was like 190 lbs? 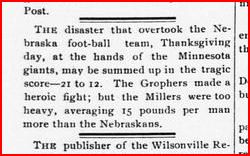 I also dug up some a great article about the 1901 game from the Daily Nebraskan. This article takes up almost 2 full pages of the 4-page Daily Nebraskan that day. It's mostly play-by-play.

Nebraska's first win in the series came in 1902. Again, from the Daily Nebraskan: 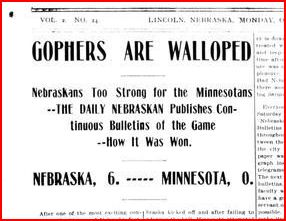 The 1902 win was huge for Nebraska. To understand how huge you have to understand the times. Nebraska had only just become a state in 1867, 35 years prior. 35 years ago today (okay, this year), Tom Osborne was heading into his fourth year as head coach.

In 1902, football had really only begun to move "west", "west" being Minnesota, while Nebraska was more than likely still considered "Wild West". Schools like Yale and Harvard controlled football - they were the name teams while schools like Michigan and Minnesota were only starting to be noticed by those muckymucks in the east.

In only it's 13th year of football, Nebraska needed to play name teams and win those games in order to get noticed - in order to be considered amongst the best of college football, and so began a long series of games between Nebraska and Minnesota.

Nebraska did not fair well early, as the series record above indicates. Yet the two teams continued to play. After 1902, Minnesota reeled off a nine-game unbeaten streak against Nebraska, tying 0-0 in 1908, but being blanked six times.

Old Nebraska Newspaper archives can be found here. It's a very valuable link to use in order to learn that we all use to be called "Rooters". Just for fun, I also decided to link the last game that the two schools played in 1990.

Minnesota (1-2), which lost to the Cornhuskers, 48-0, at Minneapolis a year ago, crossed midfield only twice. The Golden Gophers had only 66 yards in offense in the first half and ended with 106.

Nearly all of the Gophers fans I'm around concede that Nebraska will continue to win all or most of the football games in the years to come. It's probably true, although I'll give Minnesota some credit on the Jerry Kill hire. He was the guy they should have found before wasting money on Tim Brewster. Hindsight - 20/20, right?

The best thing about Nebraska playing Minnesota on a yearly basis is that I'll be able to see the Huskers play in Minnesota every other year and only have to make about a 45-minute trip to do so. I keep wondering whether I should be planning an event for all the Husker fans who'll be coming to Minnesota in the fall - and I would like to hear some feedback about it.