I thought I'd change things up a little bit today. Later this afternoon, I will be getting married to a wonderful woman.  And though there won't be more that 24 million Brits watching the ceremony, it will still be a special day for me. On Friday of this week, the University of Nebraska was voted out of the prestigious scholastic group, the Association of American Universities (AAU).

This got me thinking a little bit. My first reaction was, "Oh my gosh. What does this mean for our standing in the Big Ten? Could it in any possible way have a negative impact on our membership?"  After letting the initial shock subside, I realized that in all likelihood, Harvey Perlman shared at least some of this information with the fellow Big Ten Presidents. Can you can lie to you significant other and expect the relationship to last?  How difficult is it so save a relationship when some of the dirt comes out into the light.

Did the other Presidents know about this? I don't know, but I do know that we will find out this week how they feel about this. There will have to be some type of formal response from the conference. Will they support their new bride like a good husband should or would they throw us to the pavement at let us fend for ourselves? This event was embarrassing for Nebraska and it is embarrassing for the Big Ten, but if this new marriage is going to last, then we need to be able to be there to support the rest of the members of the conference, even during tough times.

So I thought that since it was my wedding day that I would share with you a special story between my wife and I.  It has to do with our rings. I will call this "The story of my dragon."  Warning: sappy love story ahead.

Last spring when Diana and I were planning on getting engaged, we decided we weren't going to just buy some nice shinny ring from a store, but we would have one handcrafted to be exactly the way she imagined. She had gotten a ring a few years earlier that had two simple hearts entwined. One night, she asked me which heart I preferred. I told her that I liked the left heart since she was "right" for me. So Diana's ring became a solid band with two hearts in it. One heart was made from an opal (October birthstone - hers) and the other was an alexandrite (June birthstone - mine).

Well, alexandrite is a very solid stone, but opals are fairly weak. Sure enough, a few months after I gave her the ring, the opal was damaged. We decided to replace the opal with a pink tourmaline (which can be used as a replacement for the October birthstone). So far so good. Her ring is still all in one piece.

Well, now I had this broken opal and I wanted to do something with it. I wanted a way to incorporate it into my ring, but I also wanted to be able to protect it so that it wouldn't be damaged again. Well, I had always wanted a ring in the shape of a dragon and so I started working on an idea where a dragon could be wrapped around my finger. A shard of the opal that broke would be placed on the inside of the band and serve as the dragon's "heart". I found my own alexandrite to become the dragon's eye. And so I now had a ring that would always remind me of my primary job: to protect Diana's heart, just as the dragon protects the opal. 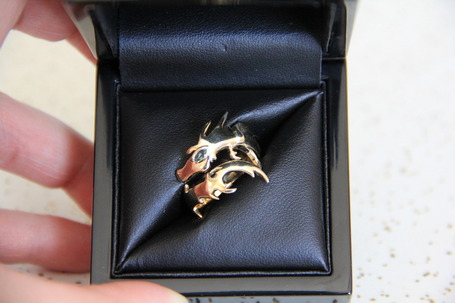 Two birds were killed with one stone.  I scored massive points with my soon-to-be wife and I got a really cool ring out of the deal.  It just goes to show all you future husbands that if you weave a cool (or potentially sappy) story into things, that you can create some really cool stuff and "have permission" from the wife.