Share All sharing options for: Who's NU in the B1G?

I've followed college football in various online forums for over twenty years, starting with Usenet groups on rec.sport.football.college? Not familiar with it? Twenty years ago, it was the only way for college football fans to interact with each other. Sure, we could read national coverage in Sports Illustrated or the Sporting News, but with this newfangled invention called the internet, fans could actually read what other fans were thinking. And, of course, in the heat of a flame war, fans in these forums used shorthand and abbreviations to refer to teams..which inevitably lead to confusion and indignation. Was UT Texas or Tennessee? Is USC South Carolina or Southern Cal? And then there was my favorite: Ohio State, Oklahoma State, or Oregon State? That one got so silly when some Ohio State fans insisted that Ohio State was THE OSU that over time in response, Ohio State became known instead as tOSU. (Note the lowercase "t" for The.) 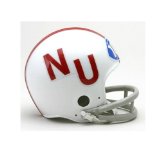 Twenty years ago in national college football forums, NU was Nebraska. Or at least that's the way it seemed. In Nebraska, it was NU. And online, nobody talked about any other schools that began with an N. But over time, Gary Barnett started working a miracle, and suddenly Northwestern football started to become relevant nationally. And suddenly, posts started appearing online that referenced NU that made absolutely no sense... until you realized that they were talking Northwestern football instead of Nebraska football.

It wasn't too confusing, truth be told. When Northwestern was making it to a Rose Bowl, the Huskers were in the middle of that 60-3 run. So even then, the references to the purple NU weren't a big deal. Easy to dismiss and ridicule. The purple NU was in the Big Ten, and the real NU was in the Big Eight...then the Big XII. Context alone would give you a pretty good idea which NU the post referred to. And that's the way things stayed as Usenet faded into oblivion while internet forums, blogs, and Twitter took over.

But then a funny thing came about last year. Conference realignment started rearing it's ugly head, and suddenly the worlds began colliding. Suddenly, Husker fans had to start paying attention to the Big Ten, and suddenly context was out the window. Especially on Twitter, where 140 character limits make space a premium, references to NU seem ambiguous at best.

Each school rightfully claims "NU" as their own. This isn't to argue that one school has the rights to "NU". Some Northwestern fans want Nebraska to use UN for University of Nebraska. Only problem is that in football, it's always been NU. Look at the 1969 helmet. Look at the words to the school song, where it's Nebraska U:

There is no place like Nebraska,
Dear old Nebraska U.

With that, it probably makes more sense for Northwestern to use "UN" or "NW". (Or as Iowa fan likes to suggest, "jNWu" for "Just Northwestern U.")

But frankly, neither school or fan base is going to change their preferred abbreviation. There's tradition involved, and frankly, there isn't a pressing need to change it up. The trick is to revert back to context. One of the guidelines I've always followed when writing is that you never - ever - use an acronym until after you've defined what the acronym stands for. That means that a story about Northwestern football can't use "NU" until after the word "Northwestern" is used. (Wildcats doesn't work either, since it could refer to Kansas State or Arizona.) Nebraska stories can't use "NU" until after either "Nebraska", "Cornhuskers", or "Huskers" is referenced.

It's a simple rule, frankly. While some in the Big Ten have gotten used to using "NU" meaning Northwestern, the Big Ten has dealt with Minnesota/Michigan and Illinois/Indiana/Iowa. Nebraska/Northwestern shouldn't be difficult either.

Unless you are trying to be difficult.