Share All sharing options for: Nebraska vs Michigan - Similarities Go Beyond Martinez, Robinson

Michigan vs Nebraska. Nebraska vs Michigan. It's now a yearly event after occurring only six times in the previous century plus of football. You'd think that these two teams would have met more often than that, given their similarities.

Both are storied programs and have been throughout college football history (conveniently forgetting the WW II years at Nebraska). Michigan is the winningest program in college football history with 892 wins, while Nebraska sits at fourth with 845. Both have won multiple national titles, have had their share of legendary coaches and both have three Heisman Trophy winners.

The teams shared a national title in 1997, a title that both teams are sure they should have won outright. Both sides claim the other was gifted their share of the title, with Wolverines fans claiming Tom Osborne was granted a title by the coaches, and Husker fans (rightfully) claiming that the media gave Michigan a share of the title because they hadn't won one since 1948 and they were tired of Nebraska winning titles in the 90s.

Both failed head coaches tried to change the culture of their schools in a desperate attempt to prove the worth of their offenses while hiring blithering idiots as defensive coordinators who ran their defenses into the ground.

Even the coaches that replaced the upsurpers are cut from the same cloth. Brady Hoke likes to point at things and yell. Bo Pelini likes to yell at things and point.

The similarities continue with the starting quarterbacks, Nebraska's Taylor Martinez and Michigan's Denard Robinson. Both are mobile quarterbacks, who've done the majority of their damage on the ground, setting numerous school records as first-year quarterbacks. Last season, Martinez and Robinson were two of only five FBS players to rush for more than 900 yards while throwing for more than 1,500. Both of their teams struggled as the quarterbacks suffered injuries towards the end of the 2010 season. If you want to get absurd, both quarterbacks even have the same amount of letters in their first and last names.

2011 has so far gone well for both quarterbacks. Both have had their good and bad games, Robinson struggled in a loss against Michigan State, completing only nine of 24 passes while Martinez threw multiple interceptions in a bad loss at Wisconsin. Both have lead their teams to 8-2 records. 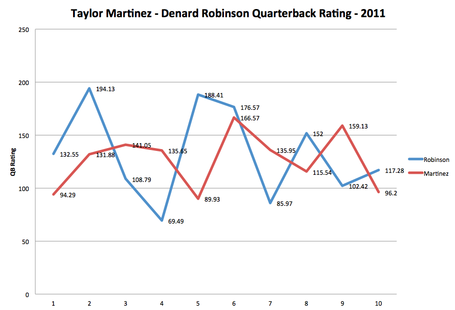 As 2011 has progressed, both Nebraska and Michigan have sought to decrease reliance on their star quarterbacks, instead relying more heavily on the ground game favored by both head coaches. Neither team wants to suffer the season-ending swoon of last year, so the rushing yardage for both quarterbacks has dropped as their coaches try to keep them healthy for the duration. 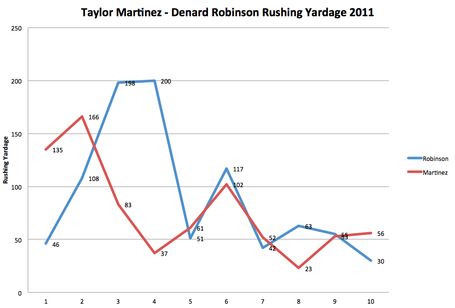 The burden has been moved to each team's primary running back. This season, both offenses have featured a single running back - Fitzgerald Toussaint for Michigan, and Rex Burkhead for Nebraska. 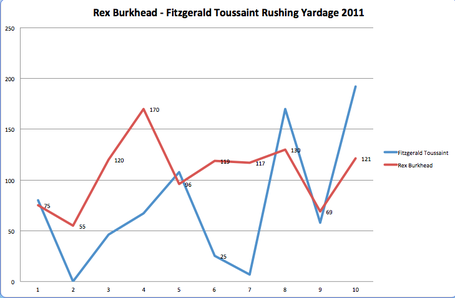 As further evidence of reliance on these tandems, one might look no further than the combined total rushing yardage for the quarterback-running backs pairs as they enter this game:

It should be no surprise, then, that both teams will enter this game with the same basic game plan. On offense, establish the run, then try to hurt the other team with play-action or screens. On defense, stop the run and force the other team to throw it.

Teams don't get much more alike than this. It's as if Nebraska was meant to be in the Big Ten playing Michigan all along.