Our nominees for the "Worst of the Week in College Football" were all over the board after a leading candidate. We've combined several to make this a little more interesting...but I think this vote probably is going to be rather onesided.

Like last week, the alleged monster that was revealed last weekend was off-limits for this vote. "Cob of the Week" is supposed to be a humorous stab at what went wrong in college football...and there is absolutely nothing funny about child abuse. Doesn't mean that there are candidates on the periphery, though.

But I'd like to nominate ESPN and their horrific coverage of Saturday's game. Maybe instead of splitting your crew to give us play-by-play coverage of the idiots in JoePa's front yard, you could like, oh, I don't know....cover the damn 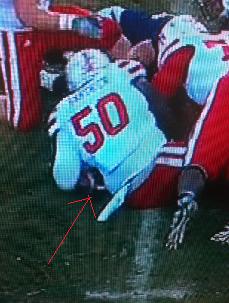 game? Worst example: Nebraska fumbles a handoff to Tyler Legate, and Penn State takes possession. Meanwhile, Bo Pelini is pretty animated with the officials on the sideline. Maybe you should run a few more replays to see what Bo wanted to challenge. Nah...ESPN goes with crowd shots and Bo arguing with the officals. Leave it to the folks with DVRs at home who discovered that Yoshi Hardrick actually recovered the ball.

Wouldn't know that from the actual ESPN broadcast. ESPN got owned by CNN and MSNBC on Wednesday night, and didn't do any better covering the game itself.

Genuinely stunned that Nebraska can throw the ball. Read the stats from last week, Chris? I know you were filling in for Urban Meyer, but pick up a paper or use that fancy Internets that everyone is raving about. Another favorite when it looked like Kenny Bell missed his route. "That was just a bad read by Martinez ...or by Bell ." No shit.

Catch the goddamn ball! You have 2 jobs: catch and block. You do only one well.

The Entire State of Texas

We had nominations for just about every school in Texas...and decided, why not just nominate the entire state and be done with it.

Texas A&M? Texas A&M taking a dump again in the second half. I would hate to be an Aggie fan this year knowing that even double digit leads aren't safe with this team. I'm sure things will turn around when they play the likes for Alabama , LSU, et al.

Texas Tech? Good lord. Though Oklahoma should get a co-nomination with them (call it a "handcuff" nomination) for losing to those clowns at home.

"Suck for Luck" only applies to NFL teams. You really think Andrew Luck might want to return next season? Really?