Share All sharing options for: Corn Flakes: The Day After Penn State

I'm not linking to any more stories about the Penn State scandal. I'm guess that you have already read enough about everything that happened, and nothing new has come up, though a lot of people want to start rehashing it again already. So only game related links today.

The game was an emotional and physical drain on the players. So much so that even the cats were affected. 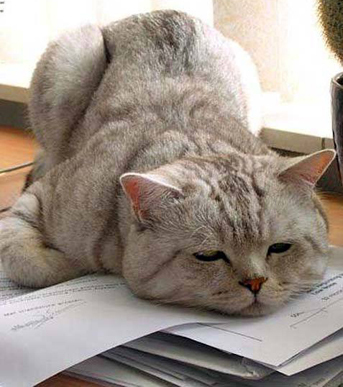 And Penn State has just started

What did you think of the Burkhead under center? Or going for it on 4th and 1? What about the ESPN coverage? Does the secondary or dropped passes concern you more? The links have thoughts, what are yours?

Husker Mike's Blasphemy: Huskers Hold off Penn State in the "Game That Probably Shouldn't Have Been"

ESPN's broadcast was a travesty on all accounts. I understand the need to cut GameDay fifteen minutes short; it would have been awkward going from Lee Corso's headgear pick straight to kickoff in State College. But seemingly all day, Penn State and Joe Paterno were portrayed as the victim. Yes, the players had nothing to do with the abuse, but Paterno did. Sticking a camera and reporter outside JoePa's house was out of line. Meanwhile, ESPN's broadcast of the game itself was woefully inadequate. It's one thing for Versus or FSN to put together a crappy broadcast, but the "Worldwide Leader"? Take that "fumble" of the handoff between Burkhead and Legate. ESPN was more concerned with showing fans and Pelini complaining to the refs than trying to figure out why Pelini was so upset. Thank goodness for Twitter, where someone with a DVR created their own instant replay and let us know what really happened on the field.

I'd post the whole thing if I could, this is the best break down from anywhere, and I'm not just saying that cause Mike posts here. Read it and tell me otherwise.

Capitol One Bowl: This looks to be 10-2 Nebraska/Michigan winner versus 10-2 Arkansas. Should Arkansas upset LSU on Black Friday, then this could be the Tigers or Tide, depending on how the BCS standings play out.

The losses by Boise State and Stanford on Saturday may have greatly enhanced the Big Ten's chances of getting an at-large BCS bid, and Nebraska's fan base will make it attractive to big bowls. If the Blackshirts defense can keep playing more like they did against Penn State than they did against Northwestern and Rex Burkhead continues leading the offensive charge, Bo Pelini's team could make its first BCS appearance in a decade.

Does Nebraska get an "A"? Find out after the jump.

Nebraska gets an overall "A" for winning on the road in one of the most precarious and conflicting situations two college football teams have ever faced. Credit Bo Pelini with strong leadership and for keeping his team grounded and focused -- not only in light of recent events, but also following last's weeks debacle. Not many teams could've beaten Penn State this day. Nebraska found a way.

The position breakdowns should be interesting when Mike posts them up.

This recap seems to paint PSU as the victim, I really think ESPN wanted Penn State to win so they would have a better story to tell. Many of you in the game thread felt the announcers were openly rooting for Penn State.

From the Sidelines: Penn State fans make a point of being nice - Omaha.com

Well sounds like it was better than the last trip to Happy Valley.

Shatel: A reason for being, and for playing - Omaha.com

One of the biggest stadiums in college football fell silent. For nearly a minute, or two, the stadium was deathly quiet. You could see the image of Brown talking, down on the field, and the thought of what he might be saying to two teams brought goose bumps. It's a scene that will be frozen in time.

Don’t assume that Penn State lost this game because of the absence of Joe Paterno. For all intents and purposes, it was business as usual with the way the game was coached. Nebraska was simply the better team.

Oh look a mention of A. The Game and B. Nebraska!

The story was all about Penn State, but don’t forget that Nebraska had to deal with a tough environment, too, and it came up with a big performance under emotional circumstances. The defense came up with a whale of a game, especially LB Lavonte David nine tackles, mostly in big moments, while Will Compton checked in with 13 tackles. … The D came up with just one sack, but it generated consistent enough pressure to screw things up. … Rex Burkhead continues to be the team’s MVP. Taylor Martinez threw well, but it was Burkhead’s 121 yards and a score that was the difference. … It’ll take a Michigan State loss, but Nebraska is still in the mix for the Legends title, first needing to beat out Michigan and Iowa.

Huskers will their way to victory at Penn State

"I always think it's about the youth, the young kids," Bo said. "I have a 12-year-old boy. ... I think there are a lot of young kids that all week ... were really confused for a lot of different reasons because there's a lot out there that people don't know. There's a lot of speculation. There's a lot of things going on. And I think it's not about the adults, it's not about the football. It's about education and it's about the youth. And I think that gets lost in the whole situation. ... Whatever comes out of it, hopefully a lot of people learned from it and nothing like that ever happens again."

Eventually, Penn State wasn't fazed by seeing Burkhead under center, though. With Nebraska holding a 10-point lead at the Penn State 49-yard line, and less than 10 minutes remaining, Burkhead tried handing the ball off. Penn State forced a fumble, recovered, and drove 51 yards for a touchdown that pulled the Nittany Lions within three points. "They stunted right into it," Beck said of the play. "We had a guy with a missed assignment. That's what caused the fumble. It wasn't anything they did necessarily. It was us."

I didn't like the play, Nebraska was pounding them, and the wrinkle allowed Penn State to get back into the game, of course as Mike points out, it wasn't a fumble recovery by them anyway.