Nebraska's non-conference opponents didn't fair too well this past week. Only Washington was able to get a win (and a solid one at that).

"You tell me," quarterback B.J. Coleman said after the Mocs' crushing 28-27 loss to The Citadel at Finley Stadium. After taking a 27-0 lead with 9:39 to play in the third, the 17th-ranked Mocs seemed well on their way to their first Southern Conference win of the season -- and a comfortable one, too. What followed was failure in all phases of the game.

Wiedmer: Football Mocs are testing the patience of the UTC fanbase | timesfreepress.com

A) "This year I was hoping for a team with sizzle, but what we have is a team that fizzles." B) "What a complete collapse. Not just the game, the season. I stepped up and bought season tickets this year and I wondered why it was possible to get tickets on the 50-yard line. I think now I understand." Yup, heck has no fury like a disappointed season-ticket holder.

The Fresno State football team looked ready for primetime — at least for three quarters. The Bulldogs took a 28-27 lead into the fourth quarter against Ole Miss only to lay an egg in the final period and lose 38-28 on Saturday night at Bulldog Stadium.

Loss still a kick in the gut for Bulldogs - Fresno State Football - fresnobee.com

A week ago, Fresno State kicker Kevin Goessling nailed two 48-yard field goals and took home conference special teams player of the week honors. In his press conference last Monday, coach Pat Hill said the senior was "so automatic" that he sometimes gets taken for granted. Then came Saturday night's 38-28 loss to Ole Miss at Bulldog Stadium. After booting the opening kickoff out of bounds, Goessling went on to miss all three of his field-goal attempts.

Even without their best pass rusher — defensive end Hau'oli Jamora is out for the season with a knee injury — and several other key players still in varying states of recovery, the Huskies turned in their best defensive effort of the season in beating Utah 31-14.

Buying In To The 2011 Washington Huskies | mySeattleSports.com

I’m sold on the Huskies. They are the hot chick you think you might be into, but aren’t quite sure about until all your friends meet her and say, "Dude, that girl is smokin’ hot." That kind of sold. Validated and cross-checked kind of sold.

At the start of the season we ran a piece on how true freshman QB’s have played the past two seasons, with one third of the season complete let’s take a look at how Brett Smith is doing so far. Through four games here are his passing numbers: 963 pass yards, 7 Touchdowns, and 4 Interceptions. If we project these numbers through a full season Brett Smith’s end of year totals could look something like this: 2,889 Passing Yards,21 Touchdowns, and 12 Interceptions. 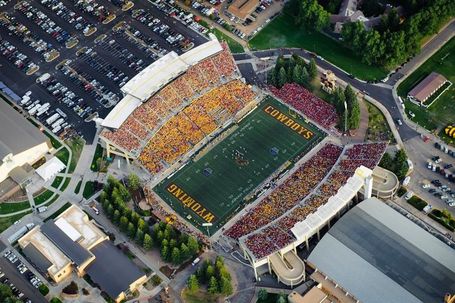 Decent amount of red in Laramie a week ago.