Huskers vs. Gophers - Still Focusing on the Negatives

Share All sharing options for: Huskers vs. Gophers - Still Focusing on the Negatives

If nothing else, last Saturday was a beautiful day for an outdoor football game in Minnesota. The weather couldn't have been any nicer, and that new Gopher stadium, wow, what a beautiful place to watch football. It is such a huge change from the Metrodome. If you've never seen a sporting event inside the Hubert H Humphrey Metrodome, imagine if you're watching a game from inside a toilet. A sterile toilet, but a toilet nonetheless.

My sons attended the game with me. I found them a couple of tickets at face value ($70), not a bad deal considering what I'd heard others paying for tickets on the lower level. I figured I'd wait close to game time to see what I could get.

I had planned to meet some people at Stub & Herbs, but much to my surprise, Stub & Herbs doesn't allow anyone under 21 in on game days, so we went around the corner to Campus Pizza. (I thought about leaving them on the street, thinking maybe if they looked abandoned we could pick up a free sympathy ticket. Then I remembered - they have a mother who defends them pretty well.) Nice place, nice people, good mix of Husker fans.

My patience paid off as just before the game started, I sent my kids off to the game and found a scalper who had a handful of tickets left. He offered $50 for a lower level see around the 25-yard line, and I didn't argue too much. $20 below face value, not bad.

I decided to have a couple beers before the game and wound up talking so some Husker fans at a beer garden. I was surprised at a few of them who said that they weren't going to the game, but had driven all the way up to Minnesota just to be there. One of them had gone to the game in Madison and said he would never be going back, that the Badger fans were that awful.

Ran into another couple from Minnesota who weren't even football fans but decided that since they were paying for a stadium they'd go to a game to see what the stadium looked like. Ah, Minnesota.

I never did make it to my seat. I spent most of the game standing on the first level concourse, watching the game and talking to other fans.

That fourth down play with the pitch and fumble forward for a first down - I spent a good ten minutes explaining the rule to the people around me. The Minnesota fans were understandably upset (my 12-year old later said the guy sitting next to him booed loudly for about 15 minutes.), but that's the rule. It was unfortunate for the Gophers as the life appeared to go out of their defense when Tyler Legate scored on a Taylor Martinez pass.

Minnesota fans were all over the board about their team. Some realized the position they're in, that Tim Brewster and Kevin Cosgrove didn't just leave the cupboard bare, but didn't do anything to teach their players about how to play football. Others... well, they weren't so understanding.

I stood next to a couple that had been married for over 30 years. The wife was reasonable. The guy was pissed. They'd bought season tickets because of the new stadium, and he hated Jerry Kill. He hated Gray, too - "He shouldn't be a quarterback", and then pointed out some Minnesota walk-on freshman that I'd never heard of standing on the sideline. "He should be quarterback." (Maybe his name was Ron Kellogg, I don't remember.)

They were a good sitcom act for 30 minutes. He'd say something nasty. She'd try to play diplomat. She even went so far as to say "he's right a lot of the time" - a line pretty rare from someone who's been married that long to say about their spouse.

After a bit, I wandered back to check out the food. Fried cheese curds. Yum. Would really go well with beer.

That's been an issue at the stadium. UMN wanted to sell alcohol, but only in the rich people suites. The legislature said - "Uh, no, if you're going to sell alcohol, you're selling it to everyone" and quashed their attempt at elitism because UMN wouldn't sell alcohol to commoners. It's rather too bad because Minnesota football would really go well with beer. 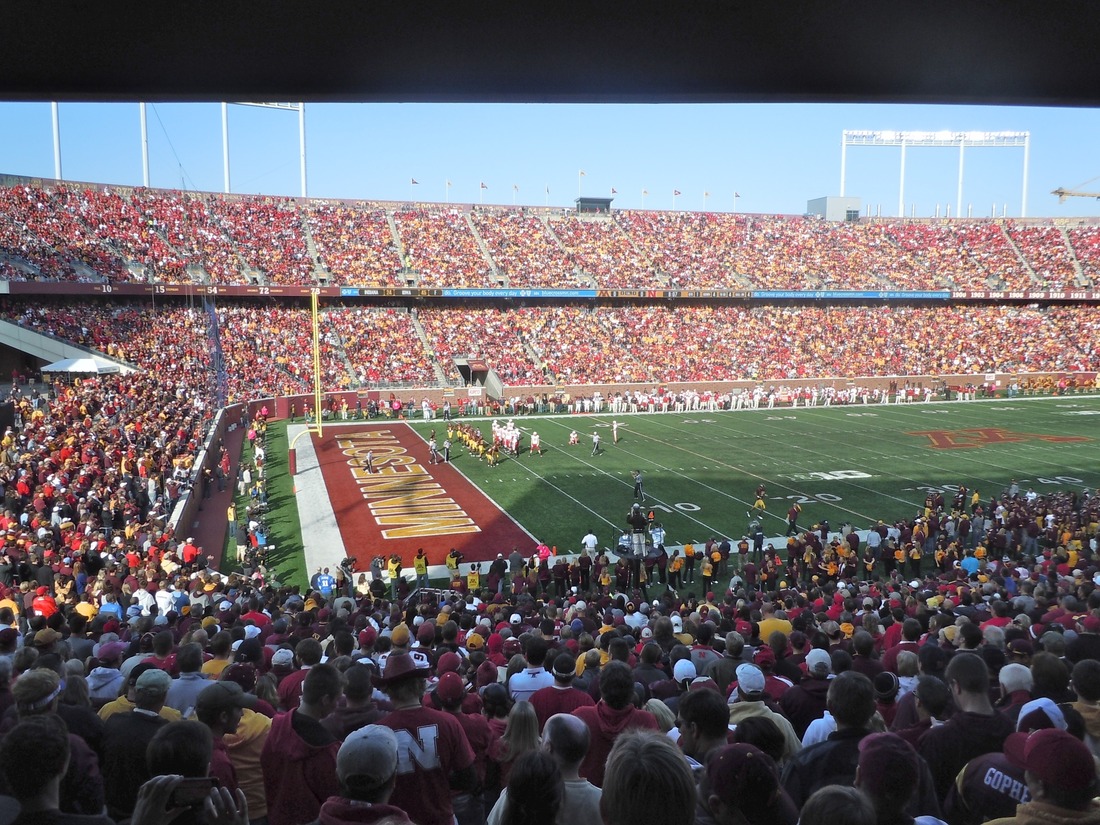 More red than maroon and gold? You tell me. (Right-Click and open in new tab for full size)

A UMN police sergeant disagreed. She was very happy there was no alcohol in the stadium. She said the crowds were decent, the Husker fans were well behaved, and they were happy to have them.

About that time came the obligatory "GOOOO BIIIIGGGG REEEDD", echoing down the concourse. It was met with an equally loud "GOOOO BACKKKK HOOOOMMME".

Honestly, I didn't think we played that well. Earlier this season, Bo Pelini said that Husker fans expect to win every game 50-0 and we're not happy unless the team does. Apparently he was talking about me. I realize it was a blow out and easy win, and that Nebraska covered a pretty big spread, but even a day later I still find myself focusing on the negatives.

Am I being too picky? Probably. It's not like I expected another 84-13 score, but the second half was fairly sloppy. Put it this way, at the end of the first half, Martinez was 8-for-10 passing for 117 yards and one touchdown. In the third quarter, he went 5-for-12. The lousy completion percentage wasn't all on Martinez - the drops by the wide receivers reflected a lack of concentration. Quincy Enunwa dropped a first down pass. Jamal Turner dropped a touchdown pass, maybe two.

You know how NFL teams build a big lead, then spend the second half running the ball so they don't embarrass the other team (all the while boring everyone to tears)? That's what I felt like we were doing in the second half - except that the pass play was the new fullback dive. One problem. It didn't run the clock as well.

Mike gave the defensive line a "B-". He was being kind. I'd have given them a C-. Minnesota's offensive line is not good, yet the interior of the line was consistently moved off the ball. The defense is now 70th nationally against the run. That's bloody awful.

The big pass play off the flea-flicker by Gray to Da'Jon McKnight didn't bother me all that much. McKnight is a very good receiver on a very bad team. He's going to make some plays, and this one was part of a gadget play, no big deal. 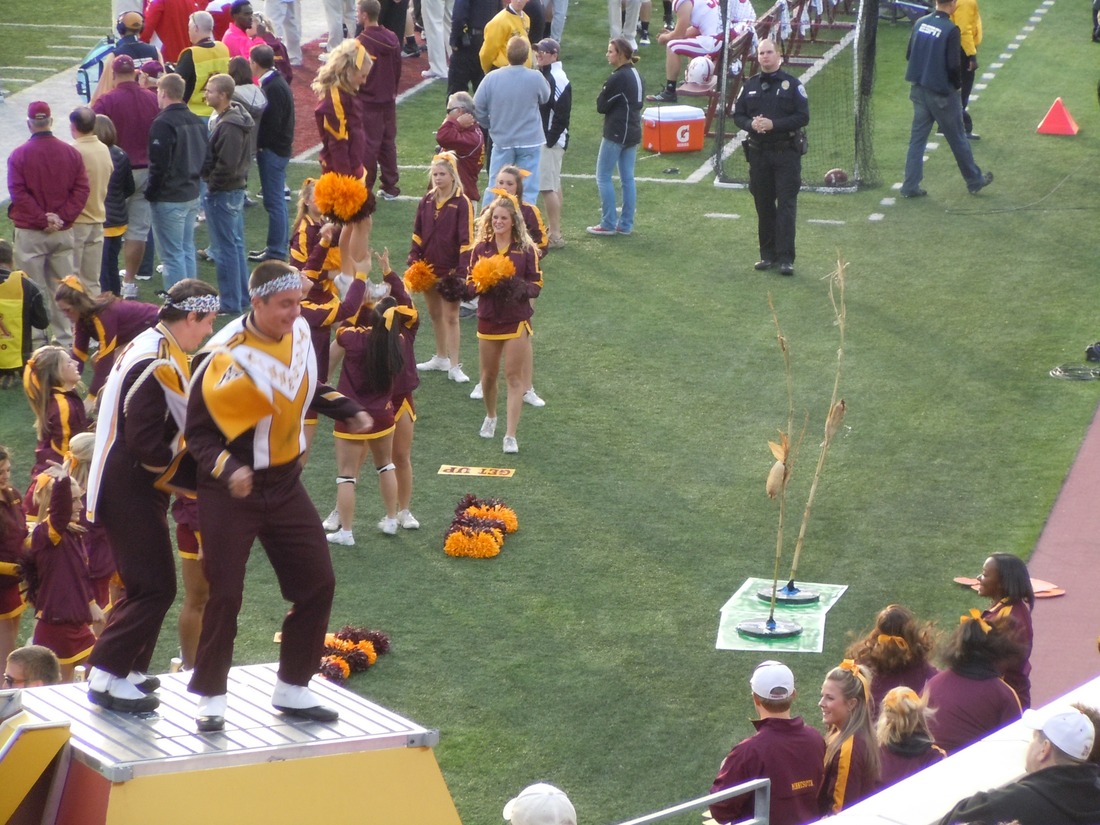 I couldn't see what they did with the corn stalks, but it involved Goldy Gopher and violence.

Were there positives? Sure.

It was good to see Brion Carnes and the young backs get some work in, although it was disappointing that Carnes didn't get the chance to throw the ball a few more times. Aaron Green looked exceptional - what that meant against a Minnesota team that's had its heart ripped out I have no idea. Braylon Heard looked pretty good in his series at the start of the fourth quarter.

Kenny Bell's 82-yard reverse for a touchdown was a thing of beauty. If other Big Ten teams weren't aware of Bell's speed, they certainly are now. Bell's run wasn't just about speed, but wonderfully athletic as he was able to stay in bounds despite the push from a Gopher defender.

Brandon Kinnie's huge 61-yard reception off a bubble screen was gorgeous. It showed Kinnie's strength as he ran through several tackles and nearly scored. Rex Burkhead was tough as always, making several plays out of nothing. If there's a player Nebraska can't afford to lose, it's sexy Rexy. Tim Marlowe's one-handed reception of a bad Martinez pass for a first down showed a player who wants to see more playing time. Ben Cotton has become a reliable tight end - probably one of the more underrated players on the offense. Khiry Cooper makes the most of his time on the field.

The biggest positive on the day?

There were two fumbles caused by errant Martinez pitches, but those are part of a maturing process and will be worked out by experience. This may have been the first game we've seen in a while where there weren't incessant ball security issues.

Let's hope that is a trend that continues. If the Huskers are going to beat Michigan State this week, they're going to have to play mistake-free football.