I guess that's what happens when you have a number of upsets of the fashion that happened this past weekend. There were so many nominations that Illinois gets left off the list. I didn't get to see the Illinois-Purdue game, other than short bits while sitting at Campus Pizza with my sons trying to find my guy for Nebraska - Minnesota tickets.

This brings up the question - how do you explain Ron Zook to a 12-year old?

On to the Cob nominees!

Jon J: My first nominee - Oklahoma linebacker Travis Lewis. A few weeks ago when Nebraska lost to Wisconsin, Lewis had this to say:

Maybe it's not so fair, though. Maybe I'm piling on. Maybe Lewis already got his as our guy Eric Martin let him know what he thought of his earlier taunt: 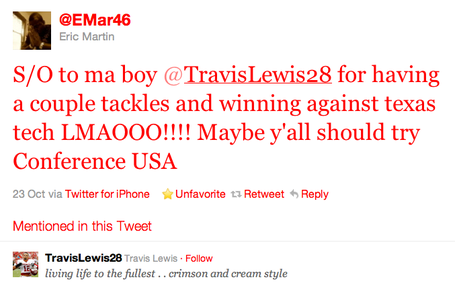 At least Nebraska lost on the road to a top-ranked team, Mr. Lewis. You lose at home to an unranked team that was an enormous underdog.

Oklahoma fans - There were a TON of empty seats in Sooner stadium,  as OU fans ditched on their team's chances of coming  back to beat Texas Tech. Considering they only ended up losing by 3, and all.

Aaron: Coach Bielema's time outs during the last minute of the game. This floored me. It gave Michigan State more time to move down the field and cost the Badgers a shot at overtime and ultimately the game.

Husker Mike: ABC for not shifting us back to Oklahoma/Texas Tech once the game started, forcing us to sit through Washington/Stanford. (Of course, we were all watching Badgers/Sparty anyway...)

How about Lee Corso for calling for a Notre Dame blowout of USC? Ooops.

Jon J: I still don't see what people were seeing in Notre Dame. Maybe Brian Kelly will get things going in another year or so, but for now, they're still just a shadow of their former selves.

Andy K: Even though he's Bronco, I'd like to add Tim Tebow for the simple reason that he being deified yet again for having a shitty game and this nonsense all goes back to his days as a holy Gator.

I am fully aware that pointing this out to folks - 1) the wounded duck he wobbled into triple coverage followed by a screen pass shot out of the hot dog cannon were butt ass luck and 2) he really had nothing to do with the onside kick recovery or the OT sack - will serve only as proof to many that I am an enemy of Christ. And, yes, I am living for the day when he becomes full enough of himself again to jump into an NFL defensive huddle & exhort them to step it up a la the 2009 ‘Bama game - at which point, they beat him senseless with his own helmet & draw satanic symbols on him with a Sharpie.