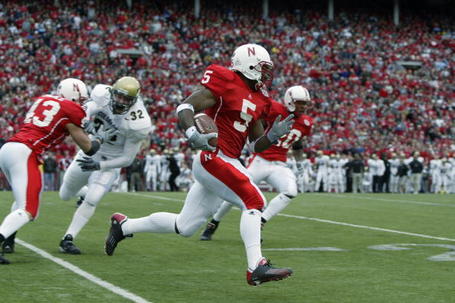 Dejuan Groce would fair well in standings were Nebraska to have been in the Big Ten. Getty Images/Brian Bahr.

Something to chew on while we wait for the season to begin (only 16 days away now!) - what individual Big Ten records would Nebraska hold if we were members of the Big Ten Conference over the past... oh... 100 years?

Keep in mind that Nebraska does not get to take any of these records with them when they make the move to the new conference. (Also keep in mind we're not taking into account competition, we're merely looking at comparable records.)

The Huskers will be starting from scratch in the Big Ten record book, one of the casualties of switching conferences.

Keep in mind that these are current going into the 2010 season. Next year we'll take another look, after our defense swarms the Big 12, and our offense scores early and often.

I was surprised that the Big Ten Conference does not track tackle records.

Nebraska's quarterback's would obliterate every Big Ten quarterback not named Antwaan Randle-El.  Randle-El occupies the top 3 positions, but his 1270 yards in 2000 would fall to 2nd behind Lord's 1412 yards in '02.

Quarterback Career Rushing:  Randle-El would remain on top, but Eric Crouch would be 2nd and Jamaal Lord would be 3rd.  Steve Taylor would be 6th.

Game: Joe Ganz's 510 yards passing against K-State in '07 would be 9th most in Big Ten history.

Touchdown passes/game:  Joe Ganz's 7 against KSU in '07 would tie Iowa's Chuck Hartlieb for the conference lead.

Game: Three Nebraska players have seven tackles for loss in a single game. Jim Skow vs Missouri in 1985, Jared Crick vs Baylor and Ndamukong Suh vs Texas in last year's Big 12 title game. They would tie for first with Jeff Zagonia, Purdue vs Northwestern in 1992 and three other players.

Season: The Big Ten tackles for loss season leader is Tom Burke of Wisconsin, in 1998. Jim Skow had 25 in 1985, which would not place him in the top ten.

Season: Thomas' six fumble recoveries in 1986 would place him at third.

Career: Ron Pruitt had nine fumble recoveries between 1973-76, which would place him at third in career.

Big Ten does not list season or career records in this category.

Surprisingly, the Big Ten does not list this information in their media guide and I have so far been unable to locate it anywhere else. If I find it, I'll do an update.

Punt Returns - Season: Dejuan Groce's 43 returns in 2002 would be in fourth place.

Kick Returns - Season: Cortney Grixby's 1,094 yards in 2007 would be second place all-time. I'm not knocking Grixby, but this is one record you'd rather not have.

Kick Return Touchdowns - Career: I can't believe this is right, but Nebraska's record book shows that the Huskers have never had a kick returner score more than one touchdown on a kick return in his career. Stan Brown of Purdue scored five from 1968-70.