I'm back from vacation in the BWCA. It was a lot of work, and I'm still in recovery mode. I'm not nearly as sore as I thought I'd be, but the hands and feet took a beating. I didn't notice it much while I was there - on the first day I forgot to apply sun screen and since we paddled for about four hours, the insides of both of my legs were burned. When I say burned, I mean, like Husker Red "glow in the dark" burn. Didn't even need a flashlight the rest of the trip.

The burn kept me from sleeping the next two nights, but I learned a valuable lesson for future trips - apply sunscreen early and often, make sure to bring one of those water purification filter pumps and bring twice as much liquor as you think you're going to need. It's kind of nice to have something at the end of a day to make sleeping on the ground that much easier.

Getting back into things means getting back into email, and one of the first that caught my eye was Mike's email about Brandon Kinnie and the cover of Cornhusker Kickoff 2010, and how it's provided motivation for Kinnie this season:

A photo of Kinnie going up for the pass showed up on a magazine cover, he said.

I thought I'd give y'all a little bit of an explanation about how that photo ended up being the cover.

(Photos after the jump may take a bit to load.)

We use Getty Images for most of our photography, so it's not like there is a never-ending supply of photos to choose from. Getty Images can be frustrating. If you want 7,000 pictures of quarterbacks and star players, they've got them, but if you want photos of offensive linemen, well, you're usually out of luck. The good thing about 2010 is that I went back to Getty and requested a bunch of specific photos, and they actually delivered on the requests, so there was a lot more variety available this year.

First and foremost, the cover photo has to be something that catches your attention. Reasons for that should be pretty obvious. There's a lot of magazines sitting on those shelves, and you want something that jumps out.

Next, preferably it's an action photo of a player that you expect to be a big contributor for the upcoming season. Last year's player was an obvious choice - it was pretty clear that Ndamukong Suh was going to have a huge year. I don't think anyone expected that it would be as huge as it was, but Suh was last year's cover.

There were three players I considered for the cover this year:

Jared Crick - for obvious reasons. We had a good photo of Crick (although not from Getty or AP, so I cannot legally post it here), and the publisher and I discussed using it over the Kinnie photo that was chosen.

Prince Amukamara - also for obvious reasons. The problem with Amukamara (good cornerbacks) is that if they're really good, you're never going to see much action around them because the ball is never coming their way. One photo that was considered is below, a beautiful shot done by photographer Jamie Squire. (The look on the woman's face on the sideline is priceless.) The Amukamara shot was used as a section opener, severely cropped, on page 25. Here's the full photo: 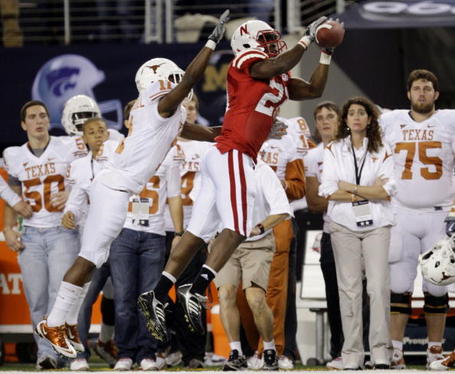 Niles Paul - because I think he's set to explode this season. In fact, one of the titles for the front cover that got scratched was "Niles Paul - Set to Explode" to emphasize Tad Stryker's excellent interview. This Paul photo was used in the receivers unit section on page 11. It's a good photo, showing Paul's passion, but to be honest, the ball isn't in the picture (an important factor), and it's not really an action photo. The other strike against Paul was his inconsistent play last season, and I wondered if some fans might be turned off if we put Paul on the cover, so Mr. Paul, if you're looking for motivation - there it is. 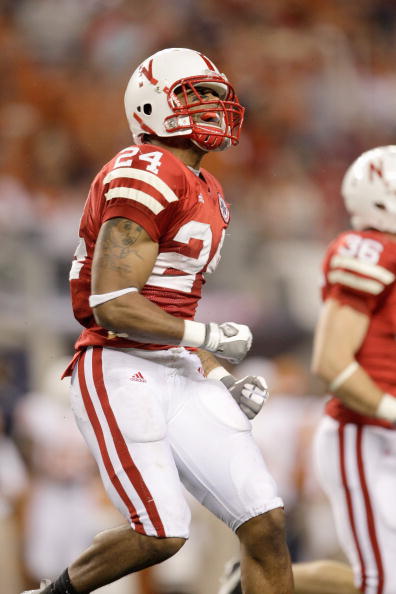 Those were the guys I intended to use... until I saw the Kinnie photo, the full version of which is below. It's a gorgeous photo, and like the others, done by photographer Jamie Squire. It's a wonderful action shot, and it's against TEXAS, and I fully expect Kinnie to be a major contributor this season, so it fit all of the criteria for a cover photo. 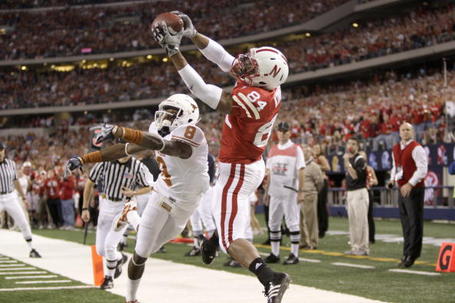 The unfortunate thing about the photo is that Kinnie came down out of bounds, as was mentioned in both the Omaha World Herald and Lincoln Journal-Star. If you want brutal honesty, I actually wondered if anyone would notice. On the magazine cover, the photo is cropped (below), and the bar code is right over the top of the end zone marker. I remembered that play, and I figured that Brandon Kinnie remembered that play, along with the coaching staff, but I honestly wondered how many people would recognize it, not because they didn't see the game, but because I'm always wondering how many people are looking for our yearbook.

During a conversation about it, I made the statement "Kinnie was learning last season. This season the SOB will come down inbounds." (SOB is a term of affection from me. If you get called other things, well.... maybe not so much.) 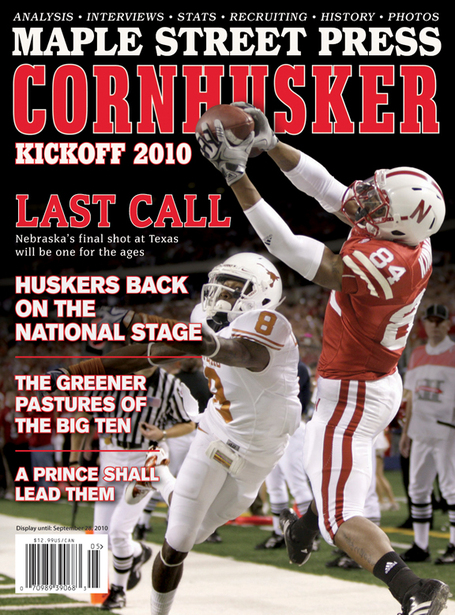 I'm glad Kinnie is using it for motivation this season. That's great to hear. It was nice to get some press out of it, even if the newspapers didn't mention the yearbook (or magazine) by name. It's harder than you think to break into Nebraska's media market. It takes a ton of patience, and a lot of work, and anything extra can help.

And as for Kinnie - I expect big things from you this season, man. I'm pretty sure I'm not alone in that.