Big 10 Divisional Splits - How Is It Going To Work?

Share All sharing options for: Big 10 Divisional Splits - How Is It Going To Work?

What we know is that Big 10 Commissioner Jim Delany has already set the guidelines for how the new Big 10 will be set up with regards to divisions:

Now that it's been out there, ideas are starting to pop up around the internets and when you read through them, you realize that this is a pretty complex subject. Mixing in those three issues, well, you're probably going to have to pick two and go from there.

Dr. Saturday gives us his alignment, proposing the following divisional split, clearly based on the idea that having Michigan, Ohio State and Penn State in the same division is too lopsided: 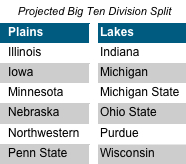 Doug Lesmerises of the Cleveland Plain Dealer joins in the "move Penn State west" crowd, probably because he doesn't want the Buckeyes to have to play Penn State and Michigan every season. Instead, he creates two divisions, one "Black" and one "Blue", and follows the same lines as Dr Saturday.

Dirk Chatelain of the Omaha World-Herald has his ideas, and they include this division make up:

At first glance, it looks pretty good for Nebraska - the top three, Ohio State, Michigan, and Penn State are on the other side. Whoooeeee!  But Chatelain includes some scheduling mix that, to be honest, doesn't really make much sense to me, at least in the way he lays it out, and sounds like it's just a way to placate people who'd complain about a lack of balance.

However, Michigan State site The Only Colors makes the case for keeping the "Big Three" in the same division, pointing out that Michigan hasn't been very good since Lloyd Carr left and may never return to their former prominence (nice shot at the Wolverines there).

Then you get Big 10 Network Gerry DiNardo's take, which is all over the board. The article does include a comment that makes it pretty clear some rivalries will not survive this change:

Delany said most rivalries (i.e., Michigan-Ohio State and Michigan-Michigan State) will be protected, though he admitted on the Big Ten Network "not all rivalries are equal."

In other words, Minnesota is probably going to be screwed somehow because they always are when it comes to Big 10 football. If I had to guess, I'm guessing the new Big 10 will mean the end to a yearly border battle between Minnesota and Wisconsin.

So, which scenario do you like, and why (or does it matter)? And which do you think has the most likelihood of taking place?

(There will be a lot of getting used to the change in media outlets we'll be watching. I'm familiar with our SB Nation sites, and will be asking them to introduce themselves to Husker fans soon. However, if you'd like to comment on which papers and web sites that Husker fans should be aware of, that'd be a great help.)