Share All sharing options for: The Death of the Big 12 & Big 10 Mayhem - Reactions Around The Country

I know most of y'all are looking for the news - has Nebraska officially joined the Big 10?

No, we haven't. It won't happen until at least until 1:00 pm today when the University of Nebraska Board of Regents meeting, so any reports you see earlier are false. If they ain't from Nebraska, it ain't true yet. Is ESPN from Nebraska? No. Fox Sports Ohio? NO.

Believe it when you hear it from the source because these guys that are supposed to be regular media are spouting bullshit faster than most of the bloggers (alternative media?) I know. In fact, next time you see one of them get on their high horse about message boards and the internet, you can tell them they're full of it.

Instead, this morning I give you reactions from around the country. I could probably call this a "Corn Flakes" edition because it follows the same format, but I opted for the search engine optimization - I'm not crazy. 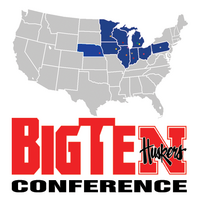 Only problems: Their basketball team is bad and their jerseys are like Wisconsin's.

Have you considered how many TV sets will explode when the "Sea of Red" meets Wisconsin? They'll glow for a bit, then BAM!

The Big Ten, the Big 12, and the Pac-10 made Thursday an exciting day for college football, but what lessons will we learn when the dust of conference realignment settles? Dawg Sports points out three things we all ought to have learned.

As always, Kyle has some good points to make.

Big Ten Deathstar Makes A Comeback
If you, as a Husker fan, are not familiar with mgoblog, then let me acquaint you. It's one of the largest college football sites on the Internets. Did anyone believe that stuff yesterday about Texas and Texas A&M going to the Big 10? I hope not.

Big Ten Armespansion: The Nebraska and Colorado Bombs Have Been Dropped, Next Comes the Fallout
Maize N Brew, SB Nation's Michigan site, mentions bombs dropping. Apocalypse? If you're Kansas, then you might feel that way.

Would Texas A&M play the sucker and take an invitation to the SEC? Texas fans should hope so.

Sometimes I wonder what Texas really wants out of all this. I'm not sure they know themselves. Maybe their own world?

Ten Strengths of the Big Ten

Mr McKewon - a notice to you and all the other Nebraska guys who are trying to figure out how you're going to cover the Big 10. If you don't list "beer" as one of the top ten strengths, you have much to learn. Minnesota, Wisconsin, Michigan - fellow Huskers, the beer is better than anywhere you ever been.

A Minnesota site worries about the rest of the Big 12 - Baylor, Iowa State, Kansas State. Imagine that, the Gophers worried about such things when no one else seems to care much.

MIZZOUEXPANSIONAPALOOZA 2010™: Deja Vu All Over Again
A look back at a Dallas Morning News conference realignment article from 1994 - this one is one of the more interesting things I ran into yesterday.

Colorado and Nebraska Have Jumped Ship – How Stable Is the Ground We're Standing On?

The ground is very stable, depending upon where you're standing. This one is somewhat of a history lesson, reminding us that not everything happens immediately. Kind of curmudgeony-like, which is why I'm posting it.

Nebraska's nice, but ND is real target
Well... he's.... nice..... If I had a nickel for every time I heard that said about me..... I'd be pretty damned broke. Given that perspective, I'll take this as a compliment.

Pete Carroll 'didn't know' Bush was on the take. But Todd McNair did
USC gets smashed with sanctions. Surprising, isn't it? But then again, not really. What's surprising is how good Pete Carroll is at playing the wounded politician.

USC AND THE NCAA: THE SMOKING CRATER AND WHAT CRAWLS OUT OF IT
EDSBS' take on the USC debacle, and once again Spencer/Orson is right on. Reggie Bush does look like a complete asshole, and Lane Kiffin... well....