Does Playing In the Big 12 Influence Nebraska's Ability to Recruit In Texas?

Share All sharing options for: Does Playing In the Big 12 Influence Nebraska's Ability to Recruit In Texas?

One of the negatives that's been mentioned regarding a potential Nebraska move to the Big 10 is the possibility that it would hurt recruiting players out of Texas. The fear is that if Nebraska is no longer playing a regular schedule in Texas, they simply won't have the visibility that Big 12 conference play has provided.

The idea is conjecture without first answering the question - has the Big 12 affected our ability to recruit in Texas? In other words, has Nebraska picked up more recruits in Texas since they've been playing a Big 12 schedule? 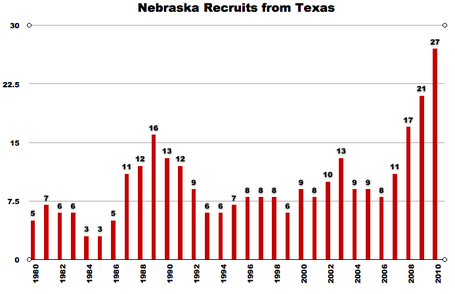 I wanted to a ways back into the Osborne years to establish a clear history, to establish enough data points that showed whether or not Osborne made Texas a focus of his recruiting. From 1987-1991 you see somewhat of a jump with a high point in 1989 as 16 players were plucked from Texas.
What you don't see is a huge jump when the Big 12 conference came into existence, which is a surprise if you believe that playing in Texas affected our ability to recruit there. You see a huge jump, much higher than any of the Osborne years, in 2008 and Husker fans are familiar with what happened in 2008 - Bo Pelini came to Lincoln. In 2010 there are more players from Texas on the roster than in the past. The need to go back through ever year in Nebraska's history is doubtful, but just in case, I checked a few years in Devaney era (at a time at which rosters weren't limited and there was no cap on the number of scholarships you could give). Here's some spot checks from the early 70s:

You can conclude the following from this (short) exercise:

- The greatest Nebraska teams, the Osborne teams in the 90s, didn't have that many Texas players.

- The huge increase in the number of Texas players on the roster occurred when Bo Pelini became head coach, not just because Nebraska is playing in the Big 12. The coaches have clearly made an effort to recruit out of Texas, and it's paid off.

Recruiting is based largely on the relationships that a coaching staff establishes with high school coaches and players. There are so many more games on TV and so much more coverage of the sport (and of course, there's the internet) that it's nearly impossible to have a good football program and not get the attention of a young man who might want to play for your school.

Will Nebraska lose recruits if they move to the Big 10 conference? Not by looking at this they won't.