So, we reached the end of a truly maddening college basketball tournament. Butler hitting the half-court shot to win the National Championship would have been the icing on the cake, but a few inches to the right gave Duke yet another banner to hang. Oh well, at least Butler can say they made it to the finals. Nebraska can't even get to the dance most years.

Thanks to everyone who signed up. It came down to the last game, which was fun. We'll try it again next season..

Final results after the jump: 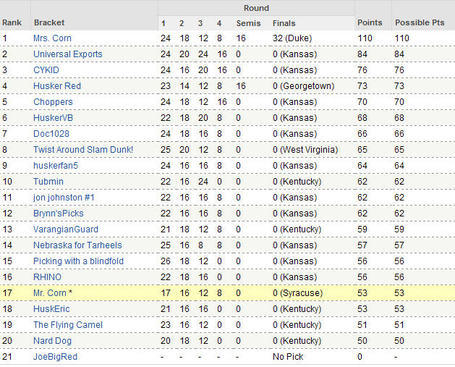 Congratulations to Universal Exports, or Andrew, for the win! (Wives are exempt from winning. Hell, how did I know she would even get close?) Contact Jon at the bottom of the page to collect your prize!

Can't say that I'm proud to be the one who follows this crap all year, and then get's beat by his ol' lady. I thought I would have at least placed in the top 5. Next year I think I'll just throw darts at it.