Share All sharing options for: 2009 Alabama - Greatest Ever Over '71 Nebraska? 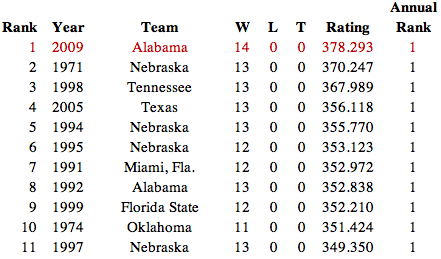 Don't know if y'all saw this, but Billingsley put out a list of the top all-time teams, and this year's Alabama team, that one that nearly lost to a backup quarterback and scored a meaningless touchdown at the end to make things look better than they really were, is ranked #1 over the 1971 Nebraska Cornhuskers.
Someone want to explain this to me? Other than a 14-game schedule, what did they have over the '71 team? Maybe it's payback... after all, the '71 team beat Alabama 38-6 in the Orange Bowl to win their national title. You realize they only allowed eight points a game on defense, right? That the '71 team beat three of the top five teams in the nation?
Just what did Alabama do last season that made them better than that?????
Or maybe we don't have much right to complain, with Nebraska in the top three out of six places.