Ndamukong Suh - Your Favorite Play Ever?

Share All sharing options for: Ndamukong Suh - Your Favorite Play Ever?

Husker fans across the nation will be waiting for tonight's NFL Draft, even though we can all guess that tomorrow night by 6:40 pm central, Ndamukong Suh will be a Detroit Lion. I might as well introduce all you Husker fans to the SB Nation Detroit Lion web site - Pride of Detroit. It could be a shocker, I guess, if Suh is taken first in the draft by St. Louis, or some other quirky thing, a trade or some NFL guru guy deciding that Oklahoma's Gerald McCoy's big toe sticks out more than Suh's and therefore he's got a more explosive pass rush or some type of cockamamie crap like that happening.

Even if it does, I want you to understand - that's the beauty of the relationship between college football and the NFL. See, it doesn't matter what team Suh gets picked by. It doesn't matter what happens during his career, nor who he plays for, or if he ultimately makes it to the NFL Hall of Fame.

Ndamukong Suh will always be a Husker. It's only a matter of time before his jersey (or possibly, his number) is retired, and he's already in our hall of fame.

Before we see him get picked up by the NFL - I want you to vote for your favorite Suh play of all time. I've picked four, but I've left an option open (no pun intended) for you to vote for one not listed and explain your choice.

A forced fumble and a bent ankle that screwed up the rest of Missouri's season. Truly a beautiful play.

Oh, yeah, it won us a bet with the Missouri site - Rock M Nation - that I'm guessing they'd like to forget. 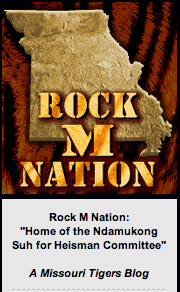 Do I have to explain this one?

I don't mean to sway your vote, but I will tell you that the last one is my favorite. There's no huge stat from it, just a quarterback hurry. But from a football perspective, it's beautiful. Suh never lets the linemen get into him, keeps his hands on the guy, punching him backwards, off-balance and then uses him as a weapon.

And there's some people who call them NFL Draft experts who say that Suh doesn't have good technique. Wow.