Corn Flakes will start helping alumni chapters promote whatever events they're having.  So if you are having an event that you'd like Corn Nation followers to know about send the info my myself, or Jon. 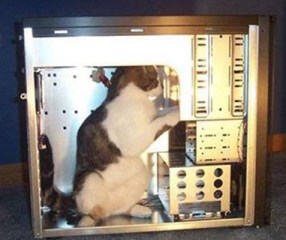 Don't send it to the cats. The helpful cats are not helpful.

Will be holding their Meet the 2010 Husker Recruits on Saturday, March 13th at 1:30 pm at the Park Meadows Fox and Hound in Denver.  Joe Ganz, Nate Swift and Correl Buckhalter will be joining Shane Gilster from Big Red Report to talk about the Huskers and the 2010 Recruits.

Monte Kiffin came to help his son but found time to do some football work as well. Kiffin visited with Nebraska coach Bo Pelini and some of his staff Thursday at the Osborne Complex. The Southern Cal defensive coordinator was accompanied by two of his Trojan assistant coaches.

1. Nebraska The Huskers will do without the services of the House of Spears, but the Pelini brothers’ defense was hardly built around one player. Replacing linebacker Phillip Dillard and safeties Matt O’Hanlon and Larry Asante won’t be easy, but the Nebraska defense should still be stout. As for the offense, last season’s home loss to Iowa State in which the Huskers had more turnovers (8) than points (7) would suggest the only way to go is up. To repeat in the North, the Huskers must defend Memorial Stadium, where they’ll get to face Missouri and Texas.

• Baker Steinkuhler, DT, Nebraska. The hometown product and second-generation Husker (Baker's dad, Dean, won the Outland Trophy and Lombardi Award in 1983) was the first ever five-star prospect out of the state of Nebraska in 2008, back when he was projected as the next great Cornhusker offensive lineman. Instead, he chose to follow his brother Ty on defense, redshirted, and served as an understudy last year to the astonishingly productive, All-Big 12 tandem of Ndamukong Suh and Jared Crick. Because of his production, Crick will probably get most of the attention as Suh's All-America successor, but Steinkuhler will be the one filling the great 'Kong's position on the line, and hoping for the same kind of breakout debut next to Crick that Crick had next to Suh.

Blah blah blah, it's the offseason, so let's make lists. That's not necessarily a bad idea, but when they're really crappy lists, then they're worse than normal. I'm not disgusted with Oklahoma having six players on this list. Nor am I necessarily disgusted with Missouri having two. But if you see a list that includes the TOP 1000 College Football Players for 2010 and it doesn't include either Prince Amukamara or Alfonso Dennard, then you know the guy who made it really isn't paying attention and is just looking for web hits. - JJ

No doubt you know exactly what kind of fan I'm talking about! The arrogant and cocky fan who thinks that God created but one college football program. They are usually the fans that consume endless amounts of the "kool aid" being served by their favorite college team, yet seem to never get enough.

Did college football's "best" fans make the list? You'll have to click to find out. Oh and you'll want to click until you get to Florida... -JL