Hey all not a whole heck of a lot going on these days that the other guys aren't covering with articles (hey you know the woman's team is in the NCAA?). But I put enough links together for a quick CF post. I had to do it all by myself too, because the cats went on spring break 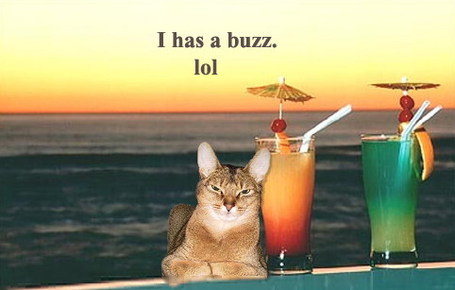 Darn cats making me do all the work

Rivals.com College Football - Mailbag: Could Huskers be better without Suh?

Since many coaches are insufferable sand-baggers, I love that Pelini will go out on a limb and make bold statements like that. At the Big 12 championship game in December, he said Nebraska could be "five times better" next season. That's going waaaaay out on a limb, considering the Huskers posted 10 victories in '09.

He has his doubts, but does anyone want to argue with Bo?

Life in the Red's Blog | Three nuggets from Ganz

Ganz keeps close tabs on Cody Green -- even at the training table. If Ganz sees Green sitting with a female student-athlete at a meal, Green has to do 100 "pencil rolls." Pencils rolls are awful. A player lays on the ground, arms stretched over his head, and rolls down the field. Vomiting usually is part of the fun (sorry if you're eating breakfast). At any rate, Ganz's training-table edict for Green is generally good-natured fun, but also is meant to encourage Green to continually strengthen his bond with teammates. Just my opinion: Coaches are preparing Green to be a prominent leader in the program. Of course, he has to take care of business on the field.

Where is Bryce Brown? 'As of now,' not on Tennessee's roster - Dr. Saturday - NCAAF Blog - Yahoo! Sports

former No. 1 running back recruit Bryce Brown might be planning to follow his brother Arthur to Kansas State rather than return to Knoxville to play for new coach Derek Dooley.

So anyone worried about the super flaky bros. at K-State? And what is "former #1 RB" worth? Ohhhhhh you were ranked #1 by recruiting experts, do you get a trophy for that, does it go on your resume?

Speaking of those purple devils rivals breaks them down. I think K-State is now a basketball school, not a football school.

Best Mascot- Lil Red and it's not close. It's the pioneer of the inflated mascot, the silly-looking balloon in coveralls we're told is a member of the Mascot hall of fame. (Print version of 3/12 paper)

HA! chalk one up for the Lil Red Lovers!