The Husker women's basketball team reaped their reward for an exceptional season when they were selected as the #1 seed for the Kansas City regional in the 2010 NCAA Women's basketball tournament. Full bracket is available here.

UConn, Tennessee and Stanford are the other top seeds. UConn is currently riding a gazillion (or 72, if you're picky) game winning streak, while Stanford's only loss this season was to UConn. Then there's perennial powerhouse Tennessee, who happens to be on the same side of the bracket as UConn. The two teams used to play regular season match ups, but stopped that practice, so you know that ESPN would love to see a UConn - Tennessee match up.

Nebraska will face Northern Iowa at Williams Arena ("The Barn") on the University of Minnesota Campus on Sunday, March 21st. The game will be on ESPN2. The entire women's tourney will be available on ESPN360 online.

Northern Iowa is making their first NCAA tourney appearance, and got in by virtue of being the Missouri Valley Conference champions.  Should the Huskers advance past UNI, they'll face the winner between UCLA and North Carolina State.

Looking at the brackets I'd have to say that the Huskers stand a pretty decent shot at a Final Four berth. Granted, anything can happen, but the highest seeds in the Kansas City regional are #2 Notre Dame, #3 Oklahoma, and #4 Kentucky.

Mrs. Corn Nation and I have already purchased tickets. I'm looking forward to heading over to Williams Arena and screaming my brains out for the Husker women. Look for an extremely loud guy wearing a Corn Nation t-shirt, and say hello. 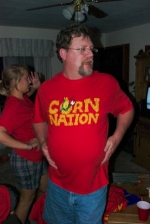 No, that's not me, but instead it's sexy man-beast Klaus Bierbauch. He's wearing my shirt, though, so look for those shirts come Sunday.