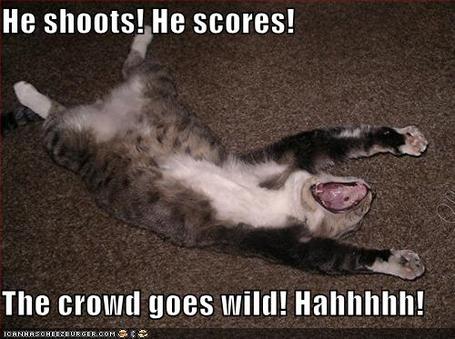 The cats enjoyed the game yesterday. They always believed.

The Chicagoans for Nebraska will be having their 2010 Founder's Day event March 26th with special guest Matt Davison. More information at their website.

The victory — only the second by a No. 12 seed over a No. 5 seed in the tournament’s 14-year history — puts the Huskers in today’s quarterfinals against fourth-seeded Texas A&M.

Yep NU has no chance today, not that they had a chance against MU... -JL

Big 12 Tournament Previews - Why Each Team Can Win It... and Why They Can't

12 Seed - Nebraska Cornhuskers Why They Can Win It: I'm not going to sugar coat it, the Huskers won't be cutting down the nets this year. In fact, I will pay each commenter to this thread $100 if the Huskers win the tournament.

And just like that, you'd better get urass over to Big 12 Hoops and comment.... just in case, ya know. - JJ

"We made adjustments with two strikes ... we can’t strike out," Bubak said of the Huskers, who fanned 100 times in the first 10 games this season. "I think we all had fun with the new approach."

This team needs to improve quickly, not hitting for power, or making contact is not a way to win. -JL

Nebraska's Connie Yori has been named the Big 12 Conference women's basketball coach of the year, and Husker senior forward Kelsey Griffin has been selected as the league women's player of the year.

Older news but worth seeing again.

Sue and her husband Rich are among nearly 400 members of the Fastbreakers. They are among the through-thick-and-through-thin fans who have sat their butts in the Sports Center seats when there were thousands of seats in which to sit.

These are the people that enjoy the success so much more. I hope they are having the time of their fan lives. -JL

McCoy better than Suh, according to McCoy

Seriously, what do people expect the guy to say? If he said he wasn't better than Suh, I wouldn't draft him because if you don't have an ego capable of playing in the NFL, then you don't belong in the NFL. - JJ

Big 12 commissioner Dan Beebe, during a teleconference with reporters Monday, said it does not appear that the league is ready to designate anchor sites for its football championship game and the conference tournaments for men's and women's basketball.

I fulling expect Texas to start crying and whining about this until they get their way. -JL

Oh, but that Holiday Bowl. It was so ugly -- Arizona was outgained 396 yards to 109 -- that it seemingly doused much of the momentum for a program on the rise. "We lost a lot of respect in that game and that's just how it happens -- it can happen pretty quickly," Stoops said. "I think our players are excited to regain their stature." That's the rub. The embarrassment of the Bawliday Bowl represents a challenge: Move forward and up or sink back down into Pac-10 and national irrelevancy.

I loved reading this. -JL

It's been quite a week for former Husker and Olympic gold-medal winner Curt Tomasevicz. The Olympics. A standing ovation at a Husker basketball game. An appearance on "Late Night with David Letterman" to present the Top Ten List. And it's not stopping. This summer, he'll throw out the first pitch for a Chicago Cubs game at Wrigley. Oh, and in case you need some football content: the former walk-on fullback and linebacker drops a nice quote about Bo Pelini.