Share All sharing options for: Corn Flakes: Part of the Evil Blogging Empire

Well that ends another signing day. While disappointed that Owa didn't chose NU, I think that getting Cooper is a better deal. The D-Line looks pretty good for a while, and NU needed a safety. 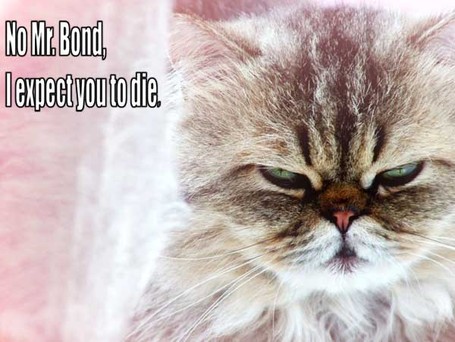 The cats head up our evil organization.

Anyway on to the links-

Maybe a raw ratio of 1-in-15 -- or even 1-in-12, or 1-in-10, or whatever it is after accounting for the early departures, injuries and academics that these numbers make no attempt to reflect -- isn't all that impressive by itself. After all, that means far more elite recruits are falling short of their star-studded birthright than are reaching it. Across the board, failure is the norm.

I like statistics. People are always blaming them for lying or making up things. They don't, stats tell you exactly was you ask of them. It's not their fault that you can't interpret them correctly. Anyway this is a good break down of recruiting rankings, and why they do in fact matter. No they are not the end all, but they do matter.

Pelini not surprised by what transpired Wednesday

He knew already that quarterback Brion Carnes, who most outside the program thought was headed to Western Kentucky, would sign with Nebraska the next day. "I knew yesterday that he was coming," Pelini said about the assumption Carnes was off the table for Nebraska. "I don’t know. That’s probably some blogger, or whatever you guys call those people that really aren’t informed but believe they are. You should have called me. I would have told you different."

Why do the blogger always get blamed? I'm pretty sure I read all those rumors on reputable news organization's sites. If you want to blame someone, blame the pay sites for exploiting the recruits.

The No. 10 Wildcats had an emphatic response to Nebraska’s quick run to start the second half and ran away with a 76-57 victory. "They came in, and I don’t know an area that they weren’t the best basketball team, plus, by far, the best-coached basketball team tonight," Nebraska coach Doc Sadler said. "They were much better coached than we were."

"I didn’t see that coming." OK, so all 10,227 fans who left the Devaney Sports Center on Wednesday night following the fourth-ranked Huskers’ 88-67 thrashing of No. 10 Oklahoma State had the same thought.

So how good is the woman's team? Wow what a statement.

Intent on locking up one of the odds-on favorites to be an NFL superstar, Nike has signed former Nebraska defensive lineman Ndamukong Suh to a contract. Suh is expected to be used in furthering Nike's lead in the training category. Over the last couple of years, the company has invested heavily in associating training with football players at the grassroots level by utilizing standardized SPARQ ratings. Suh, the 2009 AP National Player of the Year and the likely No. 1 overall draft pick in the upcoming NFL draft, beat the odds to become a Heisman finalist. Suh, who is represented in marketing deals by The Agency in New York, joins other Nike football athletes including Adrian Peterson, Troy Polamalu and Brian Urlacher.

I don't know why, but I guess I'm still sometimes shocked how big Suh has gotten.

Hey Jenny Slater.: The 50 Most Loathsome People in College Football: 50-41.

Proof that it is the offseason is the arrival of lists and you'd be remiss, miss, if you missed Doug Gillett's list of the 50 Most Loathsome People in College Football. So far, no one from Nebraska. In some ways, I think that's a bad thing. - JJ