Lots more in the links about Suh. Expect to see more as the draft gets closer. At least it beats talking about NU going to the Big East, while Texas secedes to form it's own conference and nation. It's really it's own country anyway....

The official account of 1 Ndamukong Suh. Now you can see what it's like to be a #1 draft pick. Hint: It's pretty awesome. -JL

One thing that doesn't get mentioned about Suh - he's pretty articulate. We're really going to miss him next year - JJ

Ndamukong Suh A Bust In The Making? History Says YES!!!

Do me a favor. Go here and vote "your crazy". You could vote "You're Crazy", but that's not available. - JJ

Yep a few other Huskers will be at the combine, DXP breaks it down for you - JL

And the hits just keep coming for Kelsey Griffin. Are you paying attention yet? - JJ

Fresno State had another chance to win in the final inning Monday night. But this time, the baseball team fell short and dropped its first game of the year in a 4-1 loss to Nebraska at Beiden Field.

Some negativity from the Fresno State perspective. - JJ

Over half a million less people attended college football games this past season, the first such decline in five years. When I first saw the headline, I thought about blaming it on small schools dropping football, but according to the report, it's because of drops in Division I schools. 410,740 less people went to FBS games. Add it up, and that's a fair amount of money they're losing. Somewhere, someone is freaking out. Maybe they should sell beer at stadiums, because that's what college football needs - more beer. - JJ

That's your answer to everything, more beer. -JL 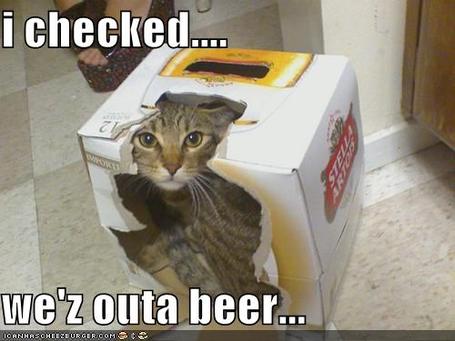 The Cats agree more beer solves everything, but if you run out....

Texas led the Big 12 and ranked fourth in the nation with an average attendance of 101,175 during the 2009 season. Nebraska ranked tenth, due to our woefully small stadium. Memorial Stadium, small? Yeah, either that, or the seats are too large. Maybe they should expand.... the stadium, that is, not the seats. - JJ

Don't know if you've noticed, but Colorado is apparently still working on this year's recruiting class. I know you love to hate them as much as I do, but I can only imagine how much Dan Hawkins is going to age this year. He's going to come out of Colorado looking like a president, but won't get the sympathy from people for what it takes to run a country for four years. - JJ

SBNation.com has something called "story streams", where you can follow a story as it progresses throughout the season. It's best represented here by the NCAA Bubblology - those teams that may or may not make the NCAA tourney. I realize this ain't Nebraska, but just in case you're a college basketball fan, hey, this one's for you. - JJ