Share All sharing options for: Corn Flakes: Ready for Baseball

Yep I'm a baseball sunshine pumper. I always think that NU can make it all the way to the CWS. So as the season starts I'm hoping NU can win a few to help feed my enthusiasm. How are you all feeling? You following the boys this spring? 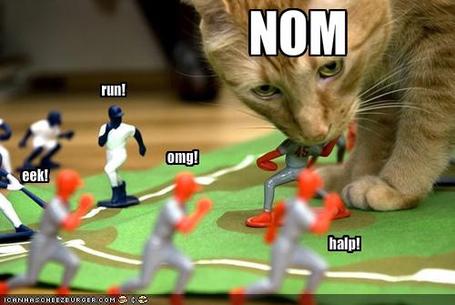 The Cats love baseball as well.

You only get one chance to be No. 1: Grab it by the horns and fling it around like they're Colt McCoy, big man.

Well, Husker quarterbacks this spring will practice without green "hands-off" jerseys most, if not all, of the time, NU offensive coordinator Shawn Watson said Tuesday, noting a significant departure from recent springs.

It's all fun and games till someone gets hurt. But would that really matter? It's not like NU has a rock starting at QB anyway, and Lee's out.

Life in the Red's Blog | NU as national title 'sleeper'?

The college game has never been more wide open. Don't automatically pencil in Alabama -- any team that loses nine starters on defense (including a handful of key leaders) will struggle in big road games, especially in the SEC. A team from the Tide's own division (Arkansas) is among a handful that could make it to Glendale, Ariz. Others: Miami, Wisconsin and Iowa. But I'm going with Nebraska, which will have one of the nation's top five defenses and a favorable schedule ( its toughest non-conference game is at Washington; Texas visits Lincoln).

Feels good to have "Nebraska" and "National Championship" in the same thought again.

Thenarse eager for another season

Since the injury happened early in the Huskers’ season, the NCAA granted Thenarse one more chance at a senior season in 2010. The safety said he was just given official word of an injury hardship last Thursday.

There's a joke in here somewhere...

Interesting read about Florida's Five Star recruits and the trouble (or not) that they've seen. - JJ

Iowa State Gets The Call From The Big 10