Corn Flakes: The B12 Conference Sky is Falling!

Share All sharing options for: Corn Flakes: The B12 Conference Sky is Falling!

Nebraska heads down to Manhattan tomorrow to play in the Octagon of Doom. I'm sorry, but I love that name. Last I heard there were still tickets available through the K-State ticket office, and who wouldn't want to go and watch NU play right now!

In other news people are convinced that the B12 is going to fall apart and everyone is going to join another conference. I don't buy it.  I think there is too much history in the match-ups in the B12, and KSU, KU, MU, ISU, and even CU are way to close to legitimately think about playing teams in the B10/11/3.14 (whatever number they settle on) 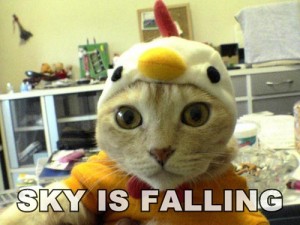 The cats hear about conference realignments.

So how about some links?

Bo Pelini’s new annual base salary is $2.1 million, a jump from last season’s $1.851 million, according to contracts released Monday by the NU athletic department. The new figure puts Pelini fifth in salary among Big 12 coaches.

Anyone have a problem with that?

The Nebraska men’s basketball coach then offered a comment that pretty much summed his team’s 91-51 loss Saturday to No. 14 Texas before 14,347 fans at the Frank Erwin Center. "That," Sadler said, "was men among boys."

No moral victories in this one.

Sophomore Sean Yost and junior Michael Mariot are scheduled to pitch for Nebraska in its opening two baseball games this week at Fresno State, pitching coach Eric Newman said. NU starts a four-game series against the Bulldogs on Friday night at 8:05. Games are also set for Saturday at 4:05 p.m., Sunday at 3:05 p.m. and Monday at 8:05 p.m.

Why yes.... it's baseball on the horizon!

David "Big Red" Max over at HP asked me to promote an auction he's having that will benefit Larry the Cable Guy's "Git R Done Foundation". Max has donated a football autographed by 16 former Heisman winners. That's one special football. - JJ

So I guess "Don't be / Sissies" is not an option. - Red Cup Rebellion

The "Tebow Rule" proposes to prohibit messages stenciled onto players' eye black. RCR examines why this rule is both unfair to the players and unnecessary.

You are an expressionless, emotionless young man who runs very fast, throws very far and tackles very hard. You will speak only that which we will tell you to speak. You will wear what we will tell you to wear. We won't compensate you what you're worth, but we will pay our coaches and administrators millions. Oh, and you'll be thankful for all of it. - JJ

Tyler Gabbert gets a broken nose over pizza. That wouldn't have happened had he come to Nebraska. Maybe over a runza, yeah, but I've never known Nebraskans to get into an argument over something as mundane as pizza. Three Missouri players in handcuffs, no arrests made. - JJ

SB Nation's Chris Dobbertean is back with another edition of Bracketology. This week, Villanova and Syracuse trade places on the top line.

I don't know if you've given up following college basketball because the Husker men are not having a good season, but in case you haven't, you need to be reading the Bracketology on a weekly basis. Someone has to win your March Madness office pool, right? - JJ

Because it's the offseason and you are oh so bored. Yes, guys at HP, it's a blatant rip off from you. Thanks. - JJ