It's time for ranking bonanzas! Pre-season, B12, recruiting, you name it someone somewhere will have a ranking! In other news get your spring game tickets now... 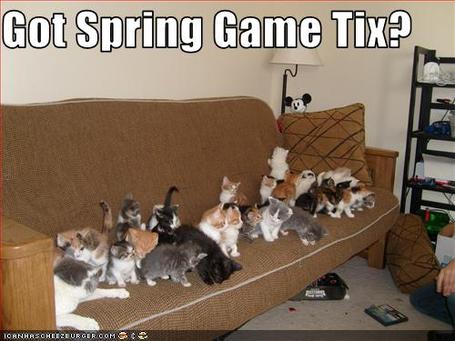 The cats have theirs, and they bought a lot of tickets

The Cornhuskers' annual Red-White Spring Game is more than two months away. As of Tuesday afternoon, the Nebraska ticket office has sold about 51,500 reserved tickets. More than 40,000 tickets were sold last week on the first day that tickets were available. An even more incredible number is that approximately 8,400 tickets were sold during the first 15 minutes they went on sale.

Get them now people before the cats buy them all.

Nebraska’s lack of execution in the final minutes of a close men’s basketball game cost the Huskers another gut-wrenching loss. This time, Doc Sadler’s crew broke down on offense three times in the final two minutes, and wasted a three-point lead in Wednesday’s 55-53 loss to No. 24 Baylor.

I'm going to start tracking moral victories. The team played hard, and it was close should we call it a win?

"This is a great win for us," Yori said. "This would have been a really, really easy one to lose and yet we somehow found a way to get it done. I don’t feel relieved. I feel excited."

I think enough fans wanted the women to win even if that meant the boys had to lose.

Since the inception of the BCS in 1998, most of the teams that have won national championships have shared certain common denominators. All have come from "Big Six" conferences, the past six champions posted at least nine victories the previous season and all but one had a winning record in post-October regular-season games. In addition, 11 of the 12 teams to win the BCS title entered their championship season with a quarterback who was a junior or senior and had at least some starting experience. Finally, 11 of 12 champions returned at least six full-time starters from a defensive unit that ranked in nation's top 20 in scoring defense the previous season.

Guess who fits that description?

5. NEBRASKA BUZZ: Entering his third season as coach, Bo Pelini has the Huskers on the fast track. The defense will be tough, fast, aggressive and good -- even without DT Ndamukong Suh. The key will be the emergence of a quarterback. Now would be a good time for Cody Green to shine.

5. Nebraska 2009 Final CFN Ranking: 17 If you’re looking for your sleeper, or at least a team that might just outside of everyone’s preseason top five who might end up in Glendale, this could be it. Ten starters are back on offense and there’s good, developed depth to rely on, and while the defense loses Ndamukong Suh and Barry Turner off the line and SS Larry Asante from the secondary, Bo Pelini’s defense isn’t going to take a major step back with Jared Crick and Pierre Allen the stars up front. Schedule-wise, the early date at Washington will be a test, but it’s winnable for a team dreaming of a national title. Road games at Oklahoma State and Texas A&M are dangerous, but Texas and Missouri have to come to Lincoln.

2. Nebraska (18 starters back: 8 offensive, 8 defensive, 2 special teams). Bo Pelini has the Cornhuskers positioned for a potential top-10 preseason ranking. Most of the offensive weapons will be back from a unit that sputtered down the stretch before breaking out in the Holiday Bowl victory. Quarterback Zac Lee will miss some of spring practice as he recovers from postseason surgery. Cody Green and Kody Spano will get most of the work until Lee returns. Nebraska coaches think the defense can be better this season, even without the up-the-middle strength of Ndamukong Suh, Phillip Dillard, Larry Asante and Matt O’Hanlon.

30. Nebraska | Scout List The Class Is Heavy On ... defensive backs. Again. Bo Pelini wants to make sure the defense remains special, and he reinforced the secondary with more great prospects after loading up the secondary last year. Corey Cooper is a talented safety who has the NFL size and speed to get the pro scouts drooling now, while Ciante Evans is a good looking corner who could play a role as a nickel and dime back early on. Overall this was a good class, but it would've been a special one had Pelini been able to win a few of the bigger battles, most notably the fight for top end Owamagbe Odighizuwa, who ended up signing with UCLA.

Wait, didn't we win 2 of the "special" battles?

Yep that time of year when people start to second guess their draft orders. McShay you're a hack.

Foley said the board contacted his office in December about the propriety of accepting 28 tickets to the NU-OU football game. Ten of the tickets were for skybox seats. The package included a pregame party. The board also was offered a package of ticket, air fare and lodging for the NU-Washington game in return for an early sign-up.

Foley is right, you know. Public agencies shouldn't be accepting tickets for advertising. If that's the only reason they're advertising, it needs to stop. - JJ

Where Are They Now Part 2: The skill positions

Since leaving the Niners, (Roger) Craig has done a number of things. Professionally he gives inspirational speeches (through TSE Sports & Entertainment). He promotes a protein mix, and has recently joined Valentine Asset Capital (I'm assuming for his name recognition as I can't find any indication that he's got any kind of economic or investment experience).

SB Nation site Niners Nation has a nice piece on former 49ers (and Huskers) Roger Craig and Tom Rathman. I was a Niners fan when they were there. It was darned hard not to be. - JJ

Dr Sat looks at what could become of the B12.

Reggie Bush Really is the dirtbag you thought he was

Promising scholarships to kids and then not following through? What kind of complete jackass does that? Reggie Bush comes to mind. -- JJ

I am walking away from ESPN.com today with a deep sense of satisfaction for what all of us on the blog network have been able to create in the past 19 months or so. My last post will be my 4,131st. They have been sent from roadside parks, dark stadiums and even from a moving airplane a couple of times when the Federal Air Marshals weren’t looking. It has been an interesting life for the last two years, but now it is time for me to move on to other opportunities.

This sucks, Tim does a great job covering the B12.