Corn Flakes has committed, no wait, yes, no...

Share All sharing options for: Corn Flakes has committed, no wait, yes, no...

Wed is the big day. Once the recruits sign on the line it's done for another year. Except for the whole recruiting is a year round situation.... Anyway I'm not giving up on anyone, or counting anyone N till Wed try to keep the freaking out to a minimum people. 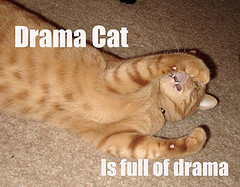 The cats love drama, and so they love recruiting

* DE Owamagbe Odighizu will make his announcement at 1:30 p.m. CST at David Douglas High School in Portland (it will be carried on ESPNU). His final three are Nebraska, UCLA and Oregon State.

* QB Brion Carnes will make his announcement at 8 a.m. CST at Manatee High School in Brandenton, Fla. There are several conflicting reports as to whether Carnes already has picked between Nebraska and Western Kentucky. Chris Conboy, Carnes’ high school quarterbacks coach, sent a message to Scout.com on Sunday saying that Carnes committed to Western Kentucky.

* S Corey Cooper is set to make his pledge at 9 a.m. CST at Proviso East High School in Maywood, Ill. Arizona, Illinois, Nebraska and Notre Dame apparently are among his finalists.

So yeah about Carnes...

By now, we've all heard the rumors swirling around QB Brion Carnes' commitment to Western Kentucky. I spoke with John Lembo from the Brandenton Herald via email tonight and this is what he said: Hi Sammy... I spoke to Brion late Saturday night. He confirmed it but chose not to comment further. John How's that for some investigative blogging? It's time to turn our attention towards Owa and Cooper.

Is it just me or am I thinking that NU could still get this guy? He doesn't sound solid to me. And why would you want to play for Western Kentucky? Ahhh the fun of recruiting.

From Jorge Brian Diaz slamming a putback to Christian Standhardinger wrestling the ball away from his foe, Nebraska pushed first, pushed harder and pushed more. .... "That’s the only way we can play," said Nebraska coach Doc Sadler, whose team improved to 13-8 overall and 1-5 in the Big 12.

The streak ends! Yayyyy! But I wonder if NU can get another win?

The streak continues! yayyyy! But I wonder if NU will ever lose a game?

The Lincoln City Council and the University of Nebraska are preparing to partner on a new, 16,000-seat arena that would become home to the Nebraska basketball teams. Tentative plans for the West Haymarket arena call for the city and the university to form a joint public agency to fund and oversee the $340 million project. The city would retain ownership of the arena.

I'd like to hear your comments about this. Tom Osborne says we need it to be competitive in basketball in the Big 12. Lincoln could use an updated arena for concerts. Still, its $340M in this economy. Is this a good idea? Anything wrong with it? - JJ

Would this be similar to the arrangement for the baseball/softball facility? -JL

WELCOME TO THE NEW WORLD, CAPTAINS - Every Day Should Be Saturday

EDSBS - Every Day Should Be Saturday - has finally joined us here at SB Nation. Spencer has been doing work at the main site - SBNation.com - for some time now, but his web site has now been converted to our platform. That means you can leave him snarky comments using your CN user name whenever he nails our beloved Huskers. - JJ

Leave it up to the NFL to try and put a stop to a 25-year Saints tradition just days after the franchise has reached the pinnacle of their success.

Surely we have some NFL fans amongst you. You guys been following this whole "Who Dat" silliness? SB Nation's David Cariello, who writes the Saints' site "Canal Street Chronicles" talks about how stupid the NFL is for trying to trademark the phrase "Who Dat". - JJ