Corn Flakes: The Sky is Falling!

Share All sharing options for: Corn Flakes: The Sky is Falling!

Well rather than Holiday Bowl game talk we get talk of coaches leaving... 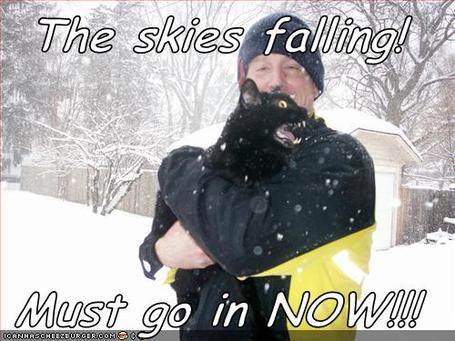 The Cats are as worried as anybody

My advice is to stop endlessly hitting F5 on your computer with every message board open (and Corn nation of course) looking for news. It's out of our hands, just try and enjoy the ride.

For what it's worth (FWIW) I've hear that there will be major staff shake-ups. Some of the things have been posted here already, but here's the biggest one yet...

Breaking News: Mark Mangino, ex Kansas Coach was seen in Lincoln Airport (hard to miss), and got in a University car and headed to campus.

No word if he is having his cable hooked up yet...

Nebraska senior cornerback Prince Amukamara has been named to the 2010 Walter Camp All-America team, the organization announced on Thursday evening

Awesome, but I still have a hard time understanding how a team with as much talent as Nebraska did this year didn't win the Big 12.

It's a sign that at Nebraska, championships are the standard, as should be the case. In just his third season as head coach, Pelini has pushed NU back into championship contention, a long way from the misery of 2007. Nebraska this season has an excellent chance to finish 11-3. I'll never feel comfortable with coaches being fired from 11-3 squads, unless there are significant off-field issues.

Oh right....
My guess is that Watson heads out, as part of a mutual break up. Then you already know that Mangino is coming in.

But that's not all that occurred. Somewhere between that Holiday Bowl game and Nebraska's season-opener vs. Western Kentucky, Bo drastically altered his vision of a winning offense. He chose to veer away from the Huskers' still-developing passing game and direct offensive coordinator Shawn Watson buy full shares in the zone read option, with a speedy wunderkind at the controls in Taylor Martinez. It is, thus far, the defining decision of Bo's career at NU. He handed the keys of a senior-laden team to a young, mercurial, close-mouthed Cali kid who frankly shunned the typical media and team-building responsibilities that most quarterbacks gladly – or at least obligingly - embrace. You saw it play out.

Yep more on Watson (I want to see if Jon will become enraged enough to ban me and/or the cats...) Watson rules Jon! You hear me?

The Nebraska-Washington match in the NCAA Seattle Regional will be televised on NET, officials confirmed Thursday. Coverage of the match will begin Friday at 9 p.m., or 30 minutes after the conclusion of the Minnesota-California match in the first semifinal.

More volleyball news as it develops. And pictures we need pictures...

Bowl news after the jump, if you care. Which I doubt. Oh and do you the loyal and intelligent readers what basketball links? I haven't been putting them in cause, well I don't care that much about it right now. Let me know.

Sadly, there is not much Nebraska can do but grit its collective teeth and bear it. Hopefully Husker fans won’t avoid Southern California in protest, but if they don’t show up because they’ve "been-there-done-that" it might be explained by the national press as a defiant middle finger by Middle America. Thus, it’s another trap for Nebraska and its fans. React negatively and you are seen as whiners who lose another merit badge on their Greatest Fans In College Football scout uniform. But this time, you must fight the urge to let Beebe get your goat. You cannot lose your cool. This time, let the conference’s pettiness take centerstage and shine brightly like the red light on a whorehouse.

Don't worry Husker fans, now everyone can see the bullshit that is the Big 12. Take a look at the last link now if you want.

You think MU fans can be bothered to go? I hope they don't, as usual, so when they get passed over every year after this we can point to this game.
The reasoning "NU has one more loss than MU so that's why MU goes" doesn't make sense when that loss is in the freaking title game, and it sure didn't make sense to Tiger fans when KU got the nod over them a few years ago. And lastly I don't give a frack what TJ Moe thinks about anything, ever.

I'm glad someone is.

Sherrington: Enjoy Big 12 while you can; nothing will save it | College Sports News | Sports News | News for Dallas, Texas | Dallas Morning News

Bottom line: The Big 12 is the SWC redux. Long term, nothing will save it. While it lasts, members will make as much money as they can, then disperse to various leagues. They'll try not to make the same mistake that Arkansas did, leaving without a rival. And by then, Texas may even have its own network up and running, printing money.

We'll have to smile and wave from the Big 10, with all our new friends.