My apologies for not getting this series up for the A+M game last week. We had a death in the family, then work issues came up and, well...it just never settled down for me. During the craziness, I was rarely at a computer, and just didn't feel like writing much to be honest. Football took a big back seat, and apparently I missed a pretty eventful weekend.

A gimpy Taylor Martinez, late hits, ball grabbin', phantom penalties, Bo blowing ALL of his gaskets, a hamstring massage, a horsekick, a baseball score, texting in the lockeroom, our QB quitting, our QB not quitting, a broken camera, Bo and Carl suspended, Bo and Carl not suspended, and eventually...another loss to a team we should have beaten.

Whew! After seeing what I just typed, I'm glad I missed it.

This should be a Colorado post, but in the spirit of Thanksgiving football...we'd be remiss to leave out the Oklahoma Sooners. Since we have already played our last game against them, let's share this post and post some memories of any Thanksgiving gamedays of the past.

Again, for those who are new to this series, we are sharing our most bestest and fondest memories of games past versus this week's opponent ( and Oklahoma). This one should be fun, as lots of big games happened while the cold/rain/snow came down in late November.

So long Buffaloes, have fun on the Left Coast.

Ironically for me, I've seen Colorado play a number of times. Just never against Nebraska for some reason.

My fondest memory will have to be what I have been calling the "turning point". I'll never forget the moment that Nebraska was "back" for me. Not for everyone else, just for me. I tend to watch football in more of an emotional way, and don't pay much attention to stats, playbooks, and defensive schemes. I am heavily invested in the flow and energy of a team, the talent level of the players, instinct, and camaraderie. To me, that is the true indicator of whether a team is "back" or even there to begin with. (Was I a hippie in my previous life? Maybe. Hopefully not a CU fan)

Having said that, the Thanksgiving experience that stands out for me will always be this one:

I was working a new job, and therefore got stuck working on this holiday(s). I spent way too much cash on a mini b+w television to watch the game at my desk. I saw the first half pretty clearly, but as the game went on there must've been some alien interference going on in downtown Des Moines, as the television signal went completely awol. The Huskers had been battling all game, and were pretty much dead even with the Buffs through three and a half quarters.

I ended my day at work, threw the piece of shit television in the garbage, and headed to the sports bar across the street to catch as much of the game as I could. Quickly, I slammed a few brewskies, and befriended another Husker at the bar who was there with his wife. He had just moved to Des Moines, and had nobody to watch the game with. We immediately bonded, and sharing  how much we wanted to win this game, and how hard it can be to cheer for the Big Red in Big Ten country. Ironic?

I bought him a drink to welcome him to Des Moines. He bought me one, and then we all looked up at the television to find the Huskers in a tough spot. Down 31-30, we had a shot at a decent field goal. But a foolish sack had just about taken us out of range, and left very little hope of pulling this one out. With fingers crossed, but doubt in our heads...we saw a skinny kid from Omaha Burke High School rock Memorial Stadium from 57 yards out....

( I badly wanted to use the video with the radio call. That one gives you chills! But they didn't have the pick6 from Suh. )

The kick was enough. Henery running around like a kid with the Husker sideline going nuts in the background.  But I've often thought about what transpired immediately afterwards. Suh (who wasn't really all that well known yet) grabs the pass from Hawkins, and then does his best steamroller impression on the way into the endzone to seal the deal. But if Henery misses that FG, then CU just takes a few knees and the game is over. The Suh pick was awesome for a different set of reasons, but Henery's kick won us the game without a doubt.

The next summer, I was in Memorial Stadium as part of Football 202, and the first thing I did was walk to the spot of the kick, just to see how long it actually was. For me, that was a huge moment in the "new' era of Nebraska football, and one that signaled a big shift in attitude. (side note- Henery was introduced with 5 others at Football 202, and his name generated a standing ovation.)

The Suh interception and score was all the proof I needed that Nebraska was back. The way he trampled a Colorado quarterback. How he launched the ball at the brick wall in defiance. Hawkins holding his head in defeat. Steinkuhler taking off his helmet (and somehow avoiding a penalty), was the passion and togetherness that I had been waiting for. 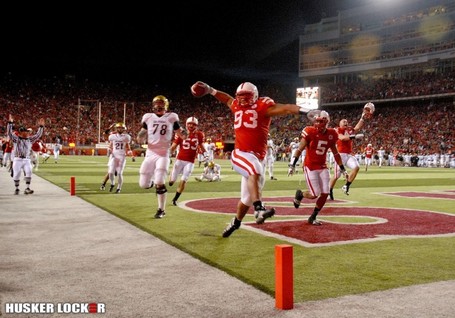 When Suh scored, I slammed my hand down on the bar in celebration, and I must've had plenty to drink, as the pain didn't really surface until the next morning when I couldn't move it. Smart guy I sure is!

My favorite player to watch from CU over the years was Darian Hagan. Great option quarterback, and gave us fits while he was there.

( Geeeeeez. Talk about extending the option!)

If I had to hate someone, it'd be Michael Westbrook, but I can't decide if it's because of what he did at Colorado, or what he did afterwards.

How about you? Let's hear some Turkey-Day recollections!