I haven't updated anything here on the CN 2010 Pick 'Em Contest, mostly because we haven't had a sponsor, therefore haven't had any prizes, and what fun is it to update a Pick 'Em without prizes?

Thanks to Gameday Depot, Corn Nation is now able to offer prizes for our Pick 'Em Contests through the end of the college football season. There will be a weekly prize for the last three weeks of the regular season (including conference championship weekend), and then another contest with a really nice prize for the entire bowl season.

Here's how it's going to work. Whoever finishes in first place this week will win a Nebraska Cornhuskers All Star Short Sleeve T-Shirt. After that, there will be similar prizes for the following two weeks, and then we'll have the 2010 Corn Nation College Bowl Pick 'Em Contest starting with the first bowl and concluding with the BCS National Championship. The winner of the bowl season contest gets a Huskers Element Zippered Jacket or a $65 gift certificate. (Gameday Depot, by the way, is also offering a monthly chance to win a $50 gift certificate just for signing up for its free newsletter, which also qualifies everyone for exclusive coupons and stuff. You can find all of their Nebraska stuff here.)

This week's winner and standing after the jump!

Week 12 Winner is rcech - so rcech needs to send me a message with contact information, and I'll figure out how you actually receive your prize!

(Note that I included more than the top winner, but instead did the screen shot down to where I finally had a good week. I am now 71st out of 83.Ha!) 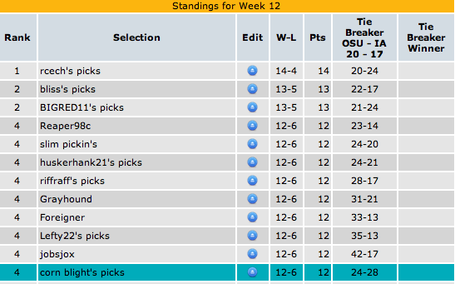 Here are the standings so far - note this doesn't include everybody. 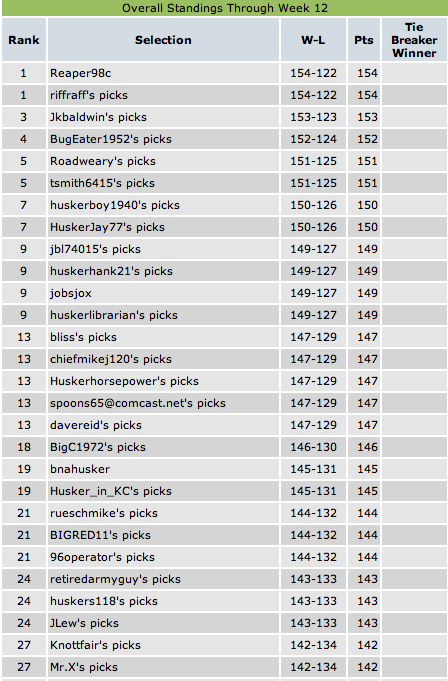