Some great stories came out of the Iowa State post, which was fitting -as the final game in the series was yet another one for the history books. Kansas is next , and I would expect a similar response with a whole lot of people having a whole lot of experiences, either in Lincoln or in Lawrence. I can't remember, but I think I heard it was either Ames or Lawrence that was the closest conference location to Lincoln, and therefore the one most likely to have a shit-ton of Big Red followers flooding it's stadium.

Before Kansas changed to a new shinier, darker blue, and started sporting facsimilies of the NY Giants uniforms....they were just plain ol' blue and red, with that goofy bird on the helmet... and for the most part, served as just another  tuneup for those powerhouse Nebraska teams of the 70s and 80s. The ones with sights set on Oklahoma or Colorado,  and the Big 8 title. Until recently, a lot of young fans never knew what it was like to lose to Kansas on the football field.

Then came Nebraska Football's darkest hours in it's long existence, and along with it came the chance for previously known doormats of the conference to exact revenge on the Cornhuskers for decades of tail-whippin' and lopsided victories that bordered on the obscene. At one point or another, each "little brother" took his place in line and got their shots in at a vulnerable Husker program. The Callahan era was a giant open wound, and the Jayhawks did thier best to get as much lost dignity back as they could, without even thinking twice.

Which takes me back to 2007, and my flashback choice for the Kansas-Nebraska series. For those new to this series, it's your chance to share your most vivid experience involving the coming weekend's opponent. Tell us about the game you remember most, from any era, and maybe a player you always respected and/or hated.

It would seem fair that for Kansas, some of their most longstanding statistical records would be on the basketball court, and versus Nebraska. Conversely, the Jayhawks would be on the short end of any records set while on the gridiron over the years. The universe would be in balance, and both teams would be happy, if just at different times of the year.

Leave it to Steve Pedersen and his NFL coach, to allow the cosmic balance of college sport to be thrown from it's axis, setting up what was to be one of the most memorable experiences I can remember as a Nebraska fan.

Kansas had seen some if it's biggest success against the Huskers in the previous two seasons, so losing this game wasn't going to be a shocker to most Nebraska fans. The Jayhawks had found something special in 2007, going 8-0 with a #8 national ranking. Unfortunately at the same time, Nebraska had just about hit rock-bottom, going 0-4 in the conference, and flirting with a losing season for the first time in...well, just about forever.

What I do remember about that day, was sitting alone in the upstairs of my home, listening to the game on the radio. I was doing my best Bob Villa impersonation, and  trying to re-finish the wood floors in the hopes that we would have a nursery for my new baby girl on the way. Some radio guy in Des Moines had part ownership or something of this FM channel, and since he was a Nebraska guy, he apparently pulled strings and broadcasted the Husker games that year. This worked out great for me, as I had no cable or money to get pay-per-view. So there I was, like many before me, working away on a saturday in the fall, and listening to Husker football on a teeny tiny radio. 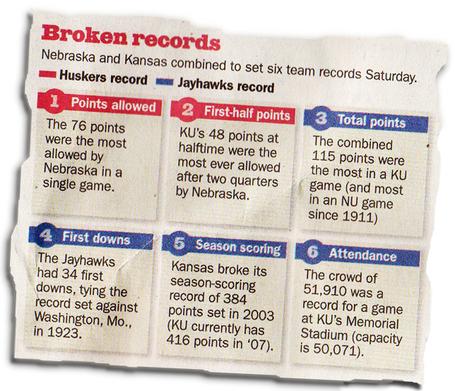 I remember Nebraska not playing so bad on offense, in fact I think Joe ganz even had a career day in passing yardage. Purify had a huge day as well. Even Marlon Lucky looked good.

I also remember the sound of the radio guy's voices. To describe it as a state of disbelief wouldn't be accurate, as I think that particular emotion had already been spent earlier in the year. This was more like a sadness. Just a sad, sad tone as the game wore on, and I remember trying to explain to my wife what it meant to give up 76 points to anyone, much less Kansas. I remember thinking that Kansas proabably didn't score 76 points on us in basketball that year. (KU actually scored exactly 76 points in a win over NU basketball on 1/29/07.)

I couldn't believe what I was hearing, and started to have that weird emotion where I wanted it to get worse. I wanted it to get so bad, that Callahan wouldn't even make it back to the bus before he was canned. Such a new feeling when talking about Husker football!

All I can say is that I'm glad we aren't there anymore. I mean, for crying out loud, at one point we had won 35 straight games over these guys, and suddenly we were going to be the team that likely stays forever on the records you see above. That's not cool. Nebraska should never be a mainstay on any Jayhawk Football record..unless it's for points/yardage allowed.

But like I said, it's all in the past. Kansas and Nebraska have both returned to their rightful places in the sporting worlds they are accustomed to ruling, and this Saturday we will close our Big Red book on "Rock Chalk Jayhawk" -forever.

At least I got the floors right.

If I had to pick one player over the years that I enjoyed watching, it would probably be CB Aqib Talib or WR Kerry Meier. The guy I didn't really care for was quarterback Todd Reesing. If for anything else, than just for leading that 2007 team, and putting up 76 big onesfor the home crowd. That Bastard...

Now it's your turn.  Got a good story? Attend a good game? Post it up!